By Dave and Adam's Card World on June 25, 2015 in Sports Card News and New Products, Topps

1985 was a seminal year in the history of professional wrestling. It was the year Vince McMahon staged the very first Wrestlemania at Madison Square Garden during the peak of Hulkamania running wild in this country. Hulk Hogan teamed up with Mr. T, who was also at the height of his popularity, in a tag team match against Rowdy Roddy Piper and Mr. Wonderful Paul Orndorff.

Thirty years and 30 Wrestelmanias later, 2015 Topps WWE Heritage will be released this November and the design for the set takes it cue from something else that was created in 1985. 2015 Heritage uses the same design as 1985 Topps Baseball, which is one of the more memorable baseball releases from the decade. The base set for WWE Heritage features 110 cards of “sports entertainers”. The checklist runs the gamut from current Superstars, NXT prospects, Divas and WWE Legends. Base card have four levels of parallel to chase, including Black, Silver, Gold (#’d to 10) and Red (#’d 1/1). 2015 Heritage also sports three 30-card inserts sets, including Rookie of the Year which highlights the top rookie performers from the last 30 years. Then & Now compares and contrast how current WWE Superstars look now to when they made their in-ring debut. NXT Called Up highlights 30 wrestlers and Divas that have graduated from the company’s NXT development program.

Heritage also features the next ten-card chapter in the Hulk Hogan Tribute set that spans all 2015 Topps WWE releases. Autographs will come with on-card signatures from top WWE talent. Look for Silver autograph parallels in Hobby boxes of 2015 Heritage. Relic cards come with shirt relics from select wrestlers, and even a bandana relic from Luke Harper. Additional relic cards include mat and trunbuckle swatches from the 2015 Money in the Bank pay-per-view event. 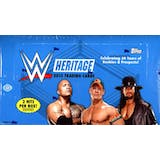 Dave and Adam's is one of the largest sellers of trading cards and collectibles in the world. Located just outside of Buffalo NY, the company operates two retail stores as well as the e-commerce website www.dacardworld.com
View all posts by Dave and Adam's Card World →
2015 Bowman Inception Baseball preview
2015 Topps Strata Football preview