By Dave and Adam's Card World on June 25, 2015 in Sports Card News and New Products, Topps

Bowman Inception is back for 2015 and is loaded with prospects and hits once again. Five-card boxes contain four autographs with an on-card signature and an autograph relic card. The most basic of the autograph cards are Prospect and Rookie Autographs. The design has a base card feel to it, but all cards have an on-card signatures. These will have at least five levels of numbered parallels. Bowman Inception Autographs are a special one per case hit that combines design elements from Inception and 2015 Bowman Baseball. Orange-bordered Inception parallels are numbered to 25, Red to five and Black are numbered one-of-one. Inception Origins Autographs have a unique design and feature current stars as well as rookies and prospects. Origins autos are numbered to 25 with Red parallels numbered to five and one-of-one Black parallels. Autograph Letter Book Cards are numbered to just two have a full letter from a game-used jersey nameplate plus a sticker auto.

Future Stars Autograph Relics use jersey relics from the 2014 SiriusXM All-Star Futures Game uniforms. They are numbered one-of-one as are the Laundry Tag parallels. 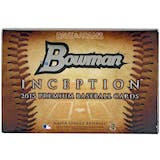 Dave and Adam's is one of the largest sellers of trading cards and collectibles in the world. Located just outside of Buffalo NY, the company operates two retail stores as well as the e-commerce website www.dacardworld.com
View all posts by Dave and Adam's Card World →
DACW Live announces impressive schedule of group breaks for National
2015 Topps WWE Heritage preview