Retail Confessions: My Time Behind The Glass, Part 1

By Dave and Adam's Card World on June 12, 2012 in Featured Articles, Uncategorized

It was my first day working in a card store and I couldn’t have been more thrilled. I nearly became numb once I stepped foot on the other side of those glass cases to hang my coat. Every card collector has goals; Putting together a vintage set, obtaining a Gem Mint 10 from PSA or even trying to pull a Frank Thomas Error card from a 1990 Topps wax box. Mine was without a doubt to work at a card store at least once in my life, and that goal was realized with great anticipation.

I never actually planned on working at a card store. I had a very well paying job in the medical industry before beginning this new venture. I was miserable, hardly had time for any collecting what so ever and worst of all I completely hated myself for the mindless drone I had become, sacrificing myself to corporate America. There were mornings I didn’t even want to get out of bed, and sometimes I didn’t. Calling off of work towards the tail end of my medical career was common and after awhile I did it without bating an eye. On days where I managed to drag my bones out of bed after hitting the snooze button 10-12 times, I was a zombie. I’d grab a dress shirt off the floor, rub a dryer sheet under the pits of it and stuff it into my khakis like a minimal security prison uniform. The worst was pulling that noose of a tie around my neck, kind of like a leash for my superiors to drag me around by; But at this point in my 8 year sentence as a Director of Business Development, that tie hung as loose as it could without being considered slovenly. The drive to work was even worse. Not the traffic part of it, that doesn’t bother me like it does some people; It was the shear terror of knowing I would be doing the same mindless, business-jerk job for another ten hours that day. Music or morning talk radio didn’t help anymore, I normally sat on the freeway in silence, generously waiving in cars coming from the on-ramp, hoping it would delay my commute a few extra minutes.

It wasn’t long before I started looking like this every night;

It was on a morning in November of 2011 that I saw the sign that would change things for the better. A sign that was probably hanging in that shop window for weeks that I somehow failed to notice because I was too busy wiping the coffee off my suit jacket after flipping my hand around to check my watch, which happened to have a hot coffee in it. It was the ‘Now Hiring’ sign in the window at the Dave & Adam’s Transit Road location in Williamsville, NY. I couldn’t get into that store fast enough to get that email address to send in a resume, as if a card store needed a resume anyway. I almost didn’t want to send one in for fear of being considered over qualified with my background, but I didn’t care. I was going to take a shot at glory, a chance at happiness, the sole opportunity my boring and routine life was waiting for.

To save you from the utter suspense, I got the job. My friends envied me, my brother was jealous and my parents showed smiles on the outside but the thought of why I would want to work in a card store over a publicly traded company most likely caused them to open up a second bottle of wine that night.

It was my dream scenario; Out of bed at 10am, jeans, t-shirt and a ball cap, and the most stress free ride to work I have had in 8 years.

Within a couple of days and jumping around from store to store I had the chance to meet everyone, and till this day I think they are the coolest group of people I have ever met. It was great to see how an eclectic group of people got along so well, almost like they grew up together, which I strongly believed in the beginning. There were college kids just working part time for some beer money, lovers of music with a more passionate love of life, fellow collectors and sports enthusiasts, and even semi professional weight lifter who could carry a Buick on his back and act like it was a sack of potatoes. He was my personal favorite; I hated to see him leave.

I was in a social rebirth of myself in a sense, and it was just the thing I needed. Instead of the fake smiles and empty descriptions of a boring weekend at home from the herd of sheep I used to work with; I heard epic stories of conquest from their weeknights out at the bars or a good-hearted pat on the back for something as simple as grabbing a pack of top loaders for a customer. The way things were done at the retail level screamed team work, and it would have been tough to find another group of people that could match our enthusiasm.

The level of customer service has changed over the years in local card shops everywhere, including where I live in Western New York. As a kid, I remember walking down to my card store only to find some slob with a meatball hoagie and a half spread across the glass counter, rolling his eyes because an unattended child with a fist full of money interrupted his pre-dinner snack. I hated asking this guy for packs of 1991 Pro Set Football, because it only meant he had to get up off his stool and walk 20 feet to get them, all while mumbling how much of a pain I was under his labored breaths. 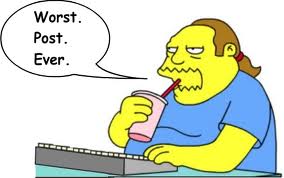 After awhile I stopped going there, but encountered the same attitude everywhere I went, except Dave & Adam’s. The great customer service tradition still exists today and I couldn’t be more proud to say I was part of it.

Everyone always asks me and I am sure many have wondered; What goes on at the card store when no one is around? Do they rip packs, collate sets and troll auction sights looking for cheap buys? Not really. In fact, you would be surprised at some of the stories that have come out of the retail locations of our stores, and in the coming weeks you will be treated to them all.

Check back next week for Part 2 of ‘Retail Confessions: My Time Behind The Glass’ .

Dave and Adam's is one of the largest sellers of trading cards and collectibles in the world. Located just outside of Buffalo NY, the company operates two retail stores as well as the e-commerce website www.dacardworld.com
View all posts by Dave and Adam's Card World →
June ‘Hit of the Month’ Prospect Entry #3 – Panini Certified Hits!
June ‘Hit of the Month’ Entry #12 – Andrew Luck

One Response to Retail Confessions: My Time Behind The Glass, Part 1