Admit it, you have always wanted one. I’m willing to bet as soon as you found out something like this could possibly exist, you searched the basement for your 1990 Topps collection and flipped through the cards hoping for it to be staring right back at you. I’m talking about the elusive 1990 Topps Frank Thomas Error Card, the one without his name on the front. 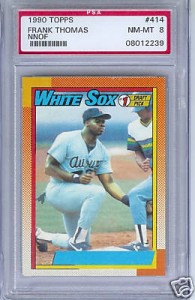 Luckily for me, I only had two 5000ct. storage boxes of the product to go through, compared to some guys I know that have attics full of the stuff. I even have an Uncle that still steps over a box of them to get to his garage, too lazy to put them away after 22 years.

As expected, I did not find one, but the thought of one still sitting undiscovered in a pack somewhere haunted my every waking hour. So what did I do? Bought two cases on eBay, quite possibly one of the most exciting yet most dumbfounding thing I have ever done as a collector. Sure, we have all made the vow never to dive deep into the 90s wax rabbit hole again, but with any recovering wax addicts, relapses occur. Whenever collecting starts to get a little boring or stressful for me, I revert to a case of 1988 Fleer or box of 1992 Upper Deck just to bring me back to the days of being a poorly dressed 10 year old hanging out at the local card shop spilling his can of 7up on the glass display cases and paying for packs in change.

This time however, I was on a mission. A quest to find what has become one of the most mysterious cards in the hobby world and I was determined to rip all 1,440 packs in those two cases to find one. I waited until a Friday, to be assured I can go constantly without any interruptions like work or sleeping, you know, the things that come secondary to card collecting. I was ready; Fridge full of cold beverages, television tuned to an all night ‘How It’s Made’ marathon on the science channel, my most comfortable sweat pants and a clear table to stack all of the undesirables. This was my night; I was going to find one.

At first it was fun looking through the cards as they were opened. Seeing a fresh faced Roger Clemens, a slightly in-shape Tony Gwynn and a pre-head enlargement Barry Bonds brought back memories of being a kid and sitting on the floor of my parents house opening these same packs my father used to bring home from the beer store for me. What was even cooler was seeing a Jamie Moyer card, and the guy still plays 22 years later! Every time I would catch a corner of a Frank Thomas card I would slowly slide the card on top of it over, hoping to catch a blank name plate, but with each one that had that black ink on it, my spirits slowly faded.

Five hours, four cans of Dr. Pepper and a case of old wax later I started to wilt. My back hurt from slumping over the table, my hands were chalky from the stale gum residue that came off the wax wrappers. I started to question my impulse purchase, almost suggesting to myself that I should just resell the second case and call it a night. I had to convince myself that what was doing was pretty fun; I mean after all, it was, so I decided to keep at it. I went all night, each box becoming less enthusiastic then the last, each pack becoming more disappointing then the previous one. If I had to look at another Tyler Houston rookie card I swear I would flip my table over, but even when I pulled 10 more of them the table stayed upright, too much of a mess to be worth it. Speaking of Tyler Houston, whatever happened to that guy?

Two cases and not a single Frank Thomas Error card, which was to be expected. Like opening any product, you think the case hit will be in your box every time, but deep down inside we know the odds are stacked up against us. I retired to bed at 730am after that marathon rip session, miserable and sore. The worse thing about it was waking up the next morning and seeing 21,600 cards stacked in my living room, I couldn’t even see the TV if I lay down on my couch the towers were stacked so high. I couldn’t help but to laugh, it was such a horrible sight to wake up to. The garbage man was going to kill me.

Weeks go by and I nearly forget about my search for the Frank Thomas error, despite the stacks of cards still obstructing my view of ‘The Deadliest Catch’. On a whim, I typed ‘Frank Thomas Error Card’ into Google to see what I could come up with; maybe I can share my story with fellow collector’s trying to find one. It was only after a few minutes of surfing that I stumbled upon this

Apparently this guy started a thread on a trading card forum about his theory on the Frank Thomas Error card. While looking at an uncut sheet of 1990 Topps cards with the normal Frank Thomas card on it, he figured that since there was an obvious printing malfunction that made this card appear nameless, surely some of the other cards around it had to be affected. Upon reading his post, other collectors looked through their old 1990 Topps cards and noticed that indeed certain connecting cards on the sheet contained missing black ink in their design. Through constant communication and amazing sleuthing they devised that other error cards existed in the same print run of the Frank Thomas Error version, making them just as collectable. Some of the guys even sold them to local dealers or on eBay for upwards to $50 a card. I’ll repeat that, 1990 Topps Baseball cards sold for $50 a card due to the realization on these errors!

I mean, check out this picture. From the cards these guys were finding, they took pictures and replaced the original card image on the uncut sheet with the error card image and tracked the pattern to where the ink didn’t adhere to the printing plate. To imagine people took time out of their lives to actually put something like this together made me extremely hopeful about the hobby world. Check it out:

Take the time to read the whole thread front to back. You will come to an amazing realization that true card collecting still exists in the hearts and minds of some people. This whole undertaking was a true dedication to finding out the truth about a mystery that has lingered around the hobby since the error card was first made public in 1994.

So what do you think you have hidden deep inside your collection? Does this story encourage you to search through the tower of 5000ct storage boxes that is about to fall over in the garage. You could find some of the 1990 Topps black ink misprints, or even better, a Frank Thomas Error card. I guess the message of this story would be that anything could exist out there. Sometimes it just takes a little bit of searching and some dedication to the hobby.

What will you find?