The playoff picture got a little bit clearer in the NFL during Week 16. The Saints, Eagles and Bills (ugh!) had their postseason hopes crushed while the Steelers and Lions got their playoff tickets punched. Let’s take a look at what players stepped up to help their teams get closer to the postseason with this week’s edition of Dave & Adam’s “Leaders of the Pack”.

Our “Leader of the Pack” at quarterback for Week 16 was certainly fighting for his team’s playoff lives on Saturday. Phillip Rivers led the San Diego Chargers back from a 21-point halftime deficit to beat the San Francisco 49ers in overtime and remain in the AFC playoff race. Despite battling a bulging disk in his back, sore ribs and throwing three interceptions Rivers threw three touchdowns in the second half to lead the rally. San Diego improved to 9-6 and is a Week 17 win over Kansas City away from going to the postseason. Rivers finished the game 33 of 54 for 356 yards and four touchdowns.

If the Chargers qualify for the postseason it will be the sixth time that Rivers will make the playoffs in his nine years as the starting QB for San Diego. He was originally acquired by the Chargers during the 2004 draft in a trade with the Giants for Eli Manning, but didn’t ascend to the starting role until 2006.

The Seattle Seahawks took control of the NFC West with a dominating victory over the Arizona Cardinals on Sunday night. The Seahawks amassed a franchise-record 596 yards of offense, but 79 of those yards will be remembered better than the rest…

Marshawn Lynch’s second of his two touchdown runs was a 79-yard scamper that went through several Arizona defenders and finished with a back flop into the endzone. Lynch’s two touchdowns and 113 yards rushing earned him our “Leader of the Pack” honors at running back.

Seattle moved into a first-place tie with Arizona in the NFC West and hold the head-to-head tiebreaker with one week to go. Lynch and the Seahawks will have a chance to defend their Super Bowl title and possibly host a playoff game along the way if they win their final game of the year.

The “Leader of the Pack” at wide receiver won’t be going to the postseason but he’s still one of the biggest stories from this season. Odell Beckham, Jr. continued his fantastic rookie season with two touchdown catches and 148 yards receiving in the New York Giants 37-27 win over the St. Louis Rams.

Beckham’s second touchdown was on an 80-yard hookup with Eli Manning late in third quarter to give the Giants a 14-point lead. He now has 1,120 receiving yards and 11 touchdown with one game to go in his rookie season.

Dave & Adam’s now has Odell Beckham, Jr. autographed mini helmets in stock. Be sure to grab one along with a box of football cards from this season to find a Beckham rookie, which continue to increase in value. 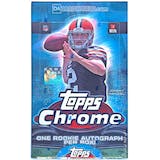 Dave and Adam's is one of the largest sellers of trading cards and collectibles in the world. Located just outside of Buffalo NY, the company operates two retail stores as well as the e-commerce website www.dacardworld.com
View all posts by Dave and Adam's Card World →
2015 Topps UFC Knockout preview
2015 Topps Archives Baseball preview