2016 Topps UFC Knockout has a brand new configuration that delivers a hit-drive product for fight fans. Every four-pack box come with a numbered autograph card per pack plus four additional hits that can be autographs or memorabilia cards. 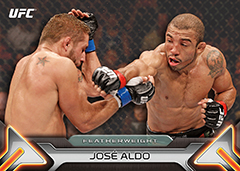 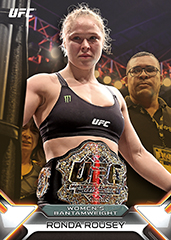 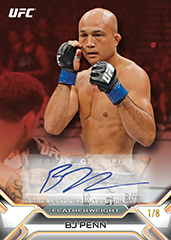 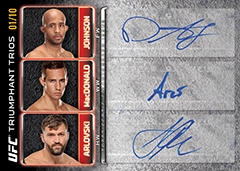 Basic Knockout autograph cards feature a checklist of 40 different UFC fighters and personalities. Those that are signing for the first time will have a special “First Issue” mark on their card. Base versions will be numbered as will the Red (#’d to 8) and Mat (#’d 1/1) parallels. Dominant Duos Dual and Triumphant Trios Triple autos are numbered out of ten and will feature signatures from multiple fighters that won during the same event. Topping the multi-auto cards are SixSigs Autographs, which feature six fighters with similar skills sets and are numbered out of five. 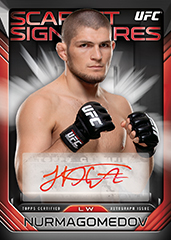 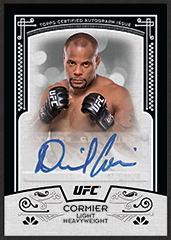 Thoughts from the Boss dual auto come with signature from a specific fighter as well as UFC president Dana White and a scouting report on the fighter from White. Ten fighters have Scarlet Signatures cards signed in red ink. Both Thoughts from the Boss and Scarlet Signatures autos are numbered out of 50. Museum Collection framed autos are available for 20 different fighters. Silver Framed cards are numbered out of 15, Gold Frame out of ten and Black Frame out of five. 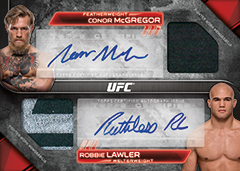 UFC Knockout features some unique one-of-0ne relic hits. Museum Memorabilia come with an autographed, jumbo-sized swatch of a fight-worn glove. You can also land a complete autographed  fighter glove if you find of the 20 autographed glove redemptions in Knockout. A new hit are the Canvas Collection originals which featured hand-drawn artwork of UFC fighters.

Dave and Adam's is one of the largest sellers of trading cards and collectibles in the world. Located just outside of Buffalo NY, the company operates two retail stores as well as the e-commerce website www.dacardworld.com
View all posts by Dave and Adam's Card World →
Dave & Adam’s “Leaders of The Pack” – Week 13
2015-16 Hit Parade Autographed Basketball Jersey Hobby Box Series 1 preview