By Dave and Adam's Card World on September 24, 2013 in Gaming News & New Products 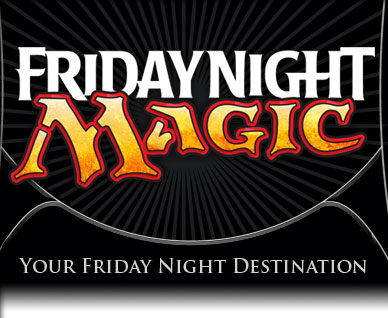 Hi everybody! Bill Carrig here to interview our FNM winner from this past week, Joe Shea. Joe is well known for being a tournament staple here in Buffalo and also as one half of the Slam Dunklers. You can catch their podcast at Facebook.com/TheSlamDunklers. Joe won our FNM this past week with the following list:

Bill: Looks like a pretty typical Wolf Run Bant list. Of course you’ve added some personal touches to it. Take me through the list. How do you win with it?

Joe: The deck wins by casting supreme verdicts to clear the board, Thragtusks to gain life and do huge chunks of damage, and Sphinx’ Revelations to draw more Thragtusks.

Bill: Great! So what are the most important cards in the deck?

Joe: The cards that are most important are actually Thragtusks and Centaur Healers, since they gain some life to help me deal with early damage, as well as go on the offensive. Alchemist’s Refuge is actually insane when it is in play in the mid to late game, since giving all of your spells flash means that you can get more value out of your supreme verdicts, and casting a Thragtusk at instant speed has saved me a lot of times. Refuge has been essential in me beating people casting Obzadat and Aetherings. Getting a Tamiyo on the board is always good because it presents a real threat and deals with their biggest guy. The deck is exceptional in terms of winning the game with a Tamiyo Emblem (though I would imagine most deck with Tamiyo are) Getting an emblem means that you can Farseek for 5-6 lands a turn to get them all in play for a giant Wolf Run on a creature, having a Supreme Verdict means that you cant lose against creatures without haste, and azorious charm and think twice all you to draw lots and lots of cards at the end of your opponent’s turn.

Bill: Obviously the metagame is always changing. So what changes have you made recently to keep it competitive?

Joe: I have been playing the deck for a while, so it has gone through many iterations as a result of the shifting metagame. I used to play Boros Reckoners instead of Centaur Healers, but the mana base is really greedy and the life gain from Centaur Healers was a lot more important than the overall power of Reckoner. The 1 of Elixer of Immortality has actually been a lot more important than I originally thought. Having an early play is always very important against people playing zombies, and being able to use the mana helps since you really don’t have many early spells to cast. Gaining the 5 life is huge, since the deck is very slow in terms of getting going, and lots of times it buys me an extra turn to cast a thragtusk or find a supreme verdict.

Bill: So what decks are easy for you to beat? Any real difficult matchups?

Joe: In terms of matchups, I think that the deck really shines against control decks. Cavern of Souls naming Thragtusks allows me to stick every one that I draw, so they have to use 2 kills spells to deal with each one. Kessig Wolf Run allows for me to just need to get through once to deal a lot of damage. For bad matchups, RG agro is usually really tough. The worst matchup is Aristocrats though. The fact that Blood Artist means all of my Supreme Verdicts are going to hurt me is a problem, and they also have lots of haste creatures to do large chunks of damage. Burning Earth is also awful against me. I run 0 basic lands, so I need to immediately have an answer for it or I am in trouble (My sideboard has 7 cards in there solely to deal with Burning Earth)

Bill: How did it perform for you this past week? Any crazy plays you’d like to share with us?

Joe: At FNM the deck played really well. I played against Andrew Roth’s Werewolves, and I remember having to cast two spells a turn to flip his guys back to humans two turns in a row. There really weren’t that many crazy plays, though the games were all really close. I did cast an Azorious Charm (drawing a card) into a Think Twice to look for a counterspell, but found a Planar Cleansing instead to deal with someone’s 2 Rakdos Keyrunes (which are also really bad cards for my deck to face against) I was very happy that in the last round I got to ultimate Tamiyo twice, because she is one of my favorite cards, and I have never lost with a Tamiyo Emblem before.

Bill: Alright, thanks Joe. Any parting comments or shout outs?

Joe: I would love to give some props to all of my opponents, since all of the matches were challenging and really fun. Major shout outs to Tamiyo and Thragtusk, which will be leaving me after this event. Also happy birthday to Liz, who celebrated her birthday at FNM (there was cake). Beyond that, as many of you know, I am part of the Slam Dunklers Podcast, so you should check that out (Facebook.com/TheSlamDunklers) We are now on MTGCast and iTunes, so there are many ways to listen to us for insights on Magic decks, the community, upcoming events, and of course the shout outs that we give. Shout outs to Alex Bianchi.

Bill: Awesome. Thanks again Joe. And thanks to all of you for reading. We will be back again next week with our FNM winner. Remember Theros is legal on Friday and that means Innistrad block and M13 are out. With the rotation, so many new cool decks are now possible. So get to brewing. Also, don’t forget that we are having a huge Theros release party on Saturday. $15 gets you in for the sealed tournament and we will have lots of awesome prizes. I hope to see you there!

Dave and Adam's is one of the largest sellers of trading cards and collectibles in the world. Located just outside of Buffalo NY, the company operates two retail stores as well as the e-commerce website www.dacardworld.com
View all posts by Dave and Adam's Card World →
Need Extra Cash? The DACW Buying Team is Looking to Spend!
Topps Announces Redemptions for 2013 Topps Chrome Baseball