Upper Deck has put a new spin of SP Game Used Hockey for 2014-15. This year SP Game Used has a new configuration with one pack per box and five cards per pack. All five cards will be either an autograph or memorabilia card unless displaced by a numbered base card.

The base cards for all rookies and veterans are numbered to the player’s jersey number and the last card in the set for each player (ex. 99/99) will be autographed. Base cards also have three levels of parallels: Gold Auto, Jersey and Patch. 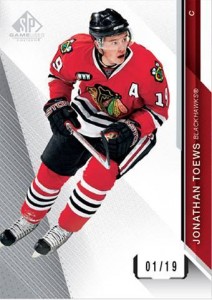 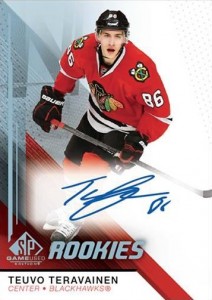 2014-15 Upper Deck SP Game Used Hockey is also jam packed with memorabilia cards from the signature events of the NHL season. Look for relics from the 2014 Stanley Cup Final, Winter Classic, Stadium Series and Heritage Classic, including jersey and patch swatch plus pieces of game-used pucks, net cords, net skirt shields and jersey tags. These memorabilia cards contain images from the specific events that they were taken from. Look for special one-of-one NHL shield logo versions from these special events. 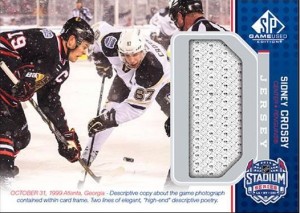 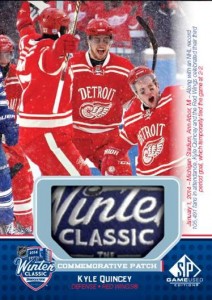 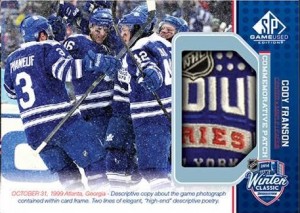 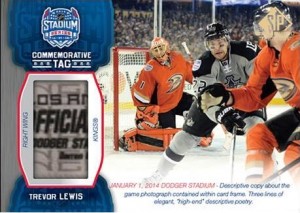 Upper Deck saved the biggest relic pieces for Supreme memorabilia cards. Supreme cards contain large swatches of patches, sticks, gloves or skates and are numbered to 12. Game Gear cards are limited to only three copies each and can contain a piece of jersey, patch, jersey tag patch or fight strap. Tandem Twigs are dual stick relic cards that are found in 1:15 packs. Stick tape variations are numbered to ten.

You’ll have a chance to find up to eight jersey swatches in Authentic Fabrics. Versions range from a single piece to Dual, Triple, Quad, Sixes and Eights. Patch versions are numbered to 35 or less, including one-of-one Eights patch parallel. Career Legacy features jersey pieces from the teams a specific player has played for during his career. Patch versions are numbered to 25. 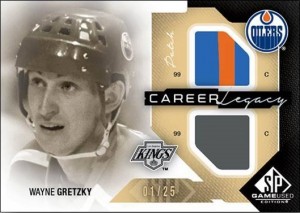 Autographed memorabilia cards come in the form of Inked Sweaters (#’d to 99) and Inked Rookie Sweaters (#’d to 149). Patch, fight strap and tag versions come in limited quantities that are numbered to 49 or less. 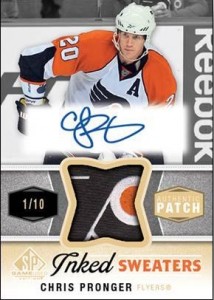 Draft Day Marks use the nameplates from the board at the NHL Entry Draft. Each card contains a letter from a player’s last name and each letter is signed. Rookie versions are numbered to 35 while veterans are numbered to ten. 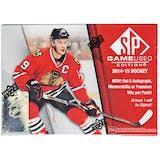 Dave and Adam's is one of the largest sellers of trading cards and collectibles in the world. Located just outside of Buffalo NY, the company operates two retail stores as well as the e-commerce website www.dacardworld.com
View all posts by Dave and Adam's Card World →
2014-15 Panini Gold Standard Basketball
Dave & Adam’s unveils Hit Parade: 1957 Baseball Edition