As you may know the 2016 National in Atlantic City is coming up fast! Unlike last year, Sean and I will not be traveling with our co-workers to the show.  Instead we will be breaking from right here in the DACW Live Lounge. While you may be bummed out that you won’t be able to meet us in person (well me at least) you will still be able to take part in specially priced National Breaks.

Here are a couple of shots from last year in Chicago: 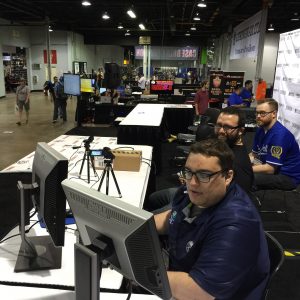 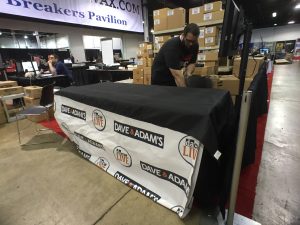 Setting up the booth!

One of the benefits of breaking from home is that we will also have access to all of the sweet products on the website for personal breaks. That is right, if it’s in stock on the website then we will be able to break it for you LIVE! You can have LITERALLY ANYTHING opened live for a personal break which means over 40,000 square footage of warehouse inventory is at your disposal. We sold out 39 case breaks during the National last year and this year we plan on demolishing that number. As of right now we have 42 National breaks listed for sale with plenty more breaks ready to go. When we say buy spots now…we mean it! Two breaks have sold out already and many more are moving towards a sell out as well. The Lounge will be alive the same hours that the Breakers Pavilion at the National will be:

We will also have plenty of random giveaways including the return of our famous suitcase giveaways! Look for store credit, unopened packs of cards and single cards to be randomly given away during the week. If that isn’t enough to pique your interest, maybe my greatest idea yet will; one person in each sold out break will be entered to win a grand prize of FREE SPOTS FOR A YEAR! We will use random.org at the end of each break to determine who is the winner of that break. This will be done like the randoms that we normally do for our breaks. Whoever is on top after the dice will will be the winner. (Note from Sean: He is not lying, this is really his idea. I would not have believed it if I was not in the room when he said it). The break must be sold out by the end of National on Sunday to be eligible for the drawing. We will take the winner from each break and do a separate random for each sport. Again, we will use random.org to determine who the Grand Prize winner is for each sport. If chosen, you will be given a free spot (chosen by us) in a break of that sport each month for 1 year (August 2016-July 2017). Nobody else has offered up such an awesome promotion because we’re making sure that DACWLive is the preeminent place for all your National Breaking needs!

If you didn’t take part in all of the excitement and mayhem at the National with us last year don’t miss out this year as it will be better than ever in 2016. Sean and I will essentially be spending every waking second together for the week so you know there will be some fireworks that are sure to be a must-watch! Who knows even the long awaited cage match between the two of us could go down! All I know is from August 2-7 you need to be watching the DACWLive Lounge! Follow us on Twitter @DACWLiveBreaks and Instagram @dacwlivebreaks to catch all of the latest breaking National break news, pun intended!