Monday on “The Chase,” breaker Steve Richardson joined the show to discuss another huge pull out of the Dave & Adam’s Card World Live Lounge.

Mac Jones, of the New England Patriots, cards have been pulled left and right this past year, and on Friday afternoon, Richardson got in on the action.

The card, you may ask? A unique Jones auto spike relic two out of two pulled from 2021 Panini Flawless football. 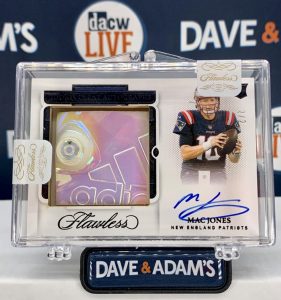 There’s been a lot of hype around products regarding the New England Patriots starting QB, with certain cards going for over six-figure dollar amounts. Jones is part of a heavy QB draft class in 2021 with Trevor Lawrence, Justin Fields, Zach Wilson, Trey Lance and Davis Mills III.

The D&A Live Lounge has pulled some bangers lately, but Richardson agreed this one ranks near the top, just because of how unique the card is, in addition to the emotions felt in the moment.

“It’s definitely near the top for a number of reasons. No. 1, that was my first ever Flawless break with Dave & Adam’s, so it was one of those where you essentially don’t know what to expect. … I grabbed the box first, obviously, then I was doing the hit cards – one on the left, one in the middle and one on the right. I felt the one on the left and I said ‘This doesn’t feel like your typical card.’ … You can tell in the video, too, I was caught off guard and I think that’s why it’s probably ranked as one of the biggest hits I’ve pulled, not necessarily because of the value, but kind of the surprise factor too,” Richardson said.

He added that he was just as surprised as everyone in the chat after revealing the Jones card.

Spike relics are unique, because the hobby doesn’t see them very often. For this card in particular, Richardson said the rarity of the card is what made it so special.

“I’ve never seen one in person,” he said. “I’ve heard of other ones pulled and obviously it was out of two so there’s another Mac out there somewhere. It was very unique, just because of the packaging, too. I knew it was something crazy, and to see … the cleat sticking out, you never see that in a card. It’s just so unique, it’s so cool, you can’t just put that in a pack, it won’t fit. To pull it the way I did was very, very cool.”

Richardson added, he’s been breaking for almost a year and he’s never seen a cleat relic, making it more rare to see. Additionally, the crew added that they’ve seen cleat relics online before, but only with certain players such as Lawrence, Jones and possibly Ja’Marr Chase.

“They’re super rare and it’s a very short print, too. There’s only a few specific players they use for the cleat relics, which makes it so much more special,” Richardson said.

Going back to the loaded 2021 QB draft class, the crew debated with Richardson which quarterback holds the most value. Arguments could be made for every QB, but the overwhelming favorite was Jones, due to his status on the New England Patriots – as the Patriots are one of, if not, the most noteworthy squads in the NFL due to the presence of coach Bill Belichick and the ghost of previous QB Tom Brady.

Lawrence also got some love from Richardson, saying he believes T-Law will turn it around this season after a tough first-year with much drama relating to the Jacksonville Jaguars.

“You can really make an argument for any of those six quarterbacks,” Richardson said.

Looking back at the break, Richardson said this was a Flawless team break and the winner was “William B.” Richardson added he was amped for the winner, and he got an insight on a bit of the excitement of the lucky Jones winner.

“I was looking through for the Patriots and I saw William B. So I go ‘Oh, William, great hit! Congratulations!’ I didn’t hear anything from him, and then about two to three minutes later I seen a YouTube comment, “WB” – that was the name on YouTube – (saying) ‘We’re freaking out over here’ and, you know, it was a delayed comment, because they were probably watching the video, saw the card and … I would’ve been running around the house,” Richardson said. “It was awesome and I love seeing that. That’s one of my favorite things as a breaker. … When you pull a big hit, just to see the reaction or to know that the person who you got the card for is in the chat and watching and probably freaking out with you, it’s the absolute best.”

Richardson will be at the National with Dave & Adam’s Card World. You can also watch him break in the live lounge on Twitch and YouTube.

For more information on everything Dave & Adam’s Card World related, visit dacardworld.com or visit all the social media platforms here.