Can you feel it folks? No, I’m not talking about that lingering National hangover! I’m talking FOOTBALL SEASON! The Hall of Fame Game gave us a taste of what we’ve been missing but we are moving forward now with football, in some capacity, every weekend for the foreseeable future *insert cool sunglasses emoji for effect*. Speaking of the National, we’re highlighting one of our employees who made this year’s convention so great – Stephen Richardson, or as we like to call him, Breaker Steve!

Let’s get into it!

Do you have any hobbies?

My favorite hobby currently is golf.  As I entered my 20s and no longer played organized sports I needed to find something to fill that hole.  Golf was the answer.  I love golf for many reasons.  It’s a great way to enjoy beautiful weather and some drinks with friends as well as an escape from everyday life where I can fully focus on improving my game each time I am out on the course. 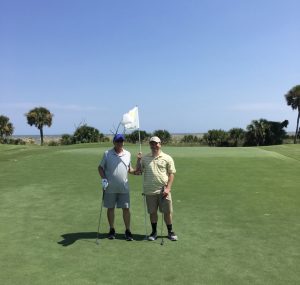 But do you yell “GET IN THE HOLE” after every shot?
What is your favorite movie?
My favorite movie is Wolf of Wall Street.  It may be a three hour long movie but Wolf of Wall Street has my full attention for its duration.  In my opinion, the movie found a perfect balance between exceptional story telling, intensity, and comedic relief.  It has a star studded cast that includes Matthew McConaughey, Leonardo DiCaprio, Jonah Hill, and Margot Robbie.
Stevie film credit here! But yeah, just one of those infinitely re-watchable movies!
What superpower would you want if you could choose one?
I feel like this is a very boring and obvious answer but I would love to fly for a number of reasons.  First off, the ability to fly (and when I say fly I mean at whatever speed I want) eliminates the headache and costs of travel.  Being able to fly means I no longer have to pay for gas, worry about making hotel reservations, or take a good portion of time out of my day to account for travel time.  Flying would also give me the ability to see friends and family who live further away more regularly and visit places I have never been before.
Old reliable…but hard to argue against!
If you were an animal what would you be and why?
Another obvious answer here but how can I not choose a dog.  My parents had two yellow labs as I was growing up (Emma and Sophie) and still to this day I envy their life.  A dog’s day consists of sleeping, playing, and eating with its lone responsibility being to go outside when it’s bathroom time.  Dogs have earned the phrase “Man’s best friend” for a reason.

Being a dog would be the life…minus the whole not being able to open packs thing haha
What are your favorite sports teams?
My favorite sports team is the Los Angeles Rams.  Yes, I know they just won the super bowl but l have been a Rams fan ever since I was five years old.  Unfortunately, I don’t have a cool story of why I chose them.  I was a little kid who loved football and the “greatest show on turf” was the most exciting team at the time.  I would run around the hallways in our home with my little Nerf football trying to mimic the amazing plays I just watched from Marshall Faulk, Torry Holt, and Issac Bruce.  As I grew up I stayed loyal to the Rams despite how tough it was.  From 2005 to 2016 the Rams failed to record one winning season but I stayed loyal and was well rewarded when Sean McVay took over as the head coach.  I’ll love Matthew Stafford forever.  Super Bowl Champs:) 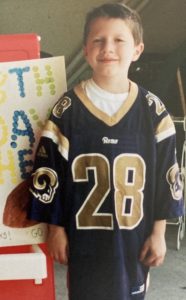 Not too different than if you had grown up a Bills fan! Now it’s our turn for that Super Bowl appearance!
What is your favorite travel/destination spot?
Hilton Head Islands in South Carolina.  Hilton Head was the annual family vacation my family went on and I fell in love.  Everyday in Hilton Head I would spend my time biking, golfing, sitting at the beach, and enjoying an incredible seafood dinner with my family.  Hilton Head has some of the most gorgeous and difficult courses I have ever played as well as some of my favorite dinners I have ever eaten.  I mean how can you not love playing an oceanside course in the morning and finishing the day with a Captain’s Platter and a couple (probably more) Rum Punches. 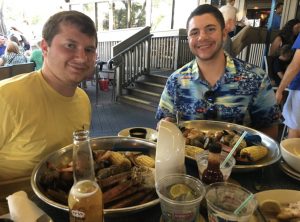 *adds Hilton Head to future vacations list*
What two items would you want if you were stranded on a deserted island?
With food and water covered I need to be entertained so this is an easy choice.  First item will be a giant TV that includes its own internet and any streaming services I need.  Second item is a cell phone with the FanDuel (no free ads) sportsbook.  I consider myself to be a “responsible” sports gambler and this would be the dream.  It doesn’t matter what sport, what time, or who is involved.  If there is a game on I will be watching it and I will be throwing a few bucks on it (responsibly).
I’m not sure if there’s too many people who’d be against taking this pairing (I’m people)
Do you have any collections of your own?
Ever since I was a kid I have collected sports cards but I also love Pokemon.  Unfortunately for me, my parents (I still love you) gave away my Pokemon collection I had as a little kid and I have slowly been working on rebuilding it.  Not only am I trying to find some of the OG Base Set, Fossil, Jungle cards I had as a kid but I am also loving the new Sword and Shield sets.  As a breaker I open up a ton of products and occasionally will get “the itch” to rip something for myself.  Pokemon cards have become that for me most recently.  Not only do I love the artwork but opening and collecting Pokemon cards now gives me a great nostalgic feeling from when I was a little kid hunting for Charizard and Gengar!
How many of us will never truly forgive our parents for throwing away our old cards!? I know i had at least 5 PSA 10 Holo Charizards!
What makes you love your job?
There are a lot of parts of my job that I love.  Being able to open up high end products on camera is a gift in its own way but I think the part of my job I love the most is the people I interact with on a daily basis.  I have become very close with a lot of my co-workers to the point where I consider them close friends.  Since I am a breaker I also get to interact with the chat everyday and they are a huge reason why I love what I do.  It still blows my mind that people will come back each day to watch and chat with me and I will never take that for granted.  I have also been fortunate enough to meet some of my viewers in person and finally put a face to the Twitch/Youtube name.  Whether it’s doing Pokemon breaks with DarthYoda, rookie chasing with Lakeside, or just getting entertained with “Dad jokes” from Bol, I love all the interactions with the chat.  If I could mention everyone I would but just know I love you all and you guys are the reason why I look forward to each day of work.
YODA FLEX!!!! If you know, you know…
What has been your biggest challenge here and what did you do to solve it on your own?
My biggest challenge actually happened a few weeks ago at the National.  First off let me say how much I appreciated and enjoyed the National Card Convention but that does not mean that it wasn’t a lot of work.  Breaking at the National was a lot different than breaking in Buffalo.  Not only did I have a chat to entertain but I also had to interact with as many people as possible in person.  Having my own booth at the Breakers Pavilion was a lot of pressure because I wanted to make sure I was representing Dave and Adam’s as best as I could while doing as many breaks as possible.  Despite being both physically and mentally exhausted all week I made sure to keep everything neat and organized, complete all my breaks each day, and interact with everyone who came up to our booth.  I may still be catching up on sleep but being able to see so many people, especially children enjoying the hobby made National well worth it!
Steve was one of the unsung heroes of the National, that’s for sure! He left it all on the fiel…I mean pavilion!

Thank you Steve for all that you do! You’re the real MVP!