One of the most popular hockey card releases of the year is approaching fast with Upper Deck Cup Hockey slated to release on July 23rd. The product originally made a huge splash in 2005/06 with an unbelievable rookie crop led by Sidney Crosby and Alexander Ovechkin, not to mention some other very popular rookies including Dion Phaneuf and Henrik Lundqvist. With a stable of inserts including some of the all time greats in hockey (Gretzky, Howe, etc.) Cup Hockey became a huge brand. 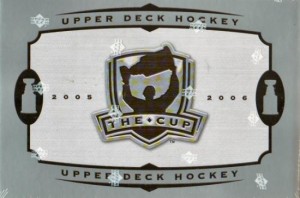 As far as rookies go, last year’s release was led by a pair of Pittsburgh Penguins – Evgeni Malkin and Jordan Staal. Also in the mix of top rookie hits were Phil Kessel, Anze Kopitar, and Paul Stastny. Although none of these NHL rookies had a following in the hockey card community as large as that of the 05/06 class, last year’s Cup Hockey was still a very strong product. Besides the rookies, the ability to pull autographs from Crosby, Ovechkin, Gretzky, Orr, and Roy make the Cup an extremely popular product. 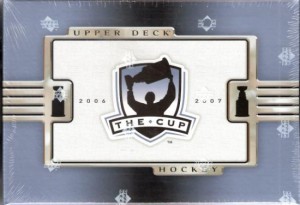 With 2007/08 Cup Hockey on the way, it will be interesting to see what value is placed on the top rookies. Players like Carey Price, Johnathan Toews, and Patrick Kane lead the way as the cream of the crop from a rookie card perspective. With a stellar line up of autographs and jersey inserts along with the addition of redemption cards for Uncut sheets, look for this year’s  UD Cup Hockey to be a huge hit in the hockey card world.

Any excitement among the Hockey Card Collectors out there?