A Casual Player In The Competitive Court: Dave and Adam’s Grand Prix Trial

Often, I am accused of being to casual and laid back as a tournament organizer and to this accusation I announce, “Proudly.” I can’t help it. I was never a competitive player. No matter the venue the flavor was always more important to me then the win. I remember laughing myself sick at the flavor text for Trained Armodon and then laughing even harder when I gave it Flying and pictured little tiny wings on a giant elephant, flapping for all they were worth to keep it aloft. I was a Johnny from the first, albeit less mature then MaRo might describe the stereotype.

I digress. I have always been a casual player. The fun has always been more important then the fundamentals. Gentlemen’s mulligan, takesie-backsies, un-set cards, and themed crazy combo decks are my wheelhouse. So, you can imagine how out of my depth I felt leading up to organizing my first Competitive Rules Level Enforcement event. I wondered if I might combust walking into the room.

Need not have worried. This is precisely why the good folks at Wizards of the Coast insist on you having a Judge and I found mine in the form of Bill Carrig, a Level 2 Judge from the area. Bill took my disorganized laid back style and applied order to the Universe… or the Planes if you prefer. He dealt with deck registration while I dealt with people calling to say they’d be late. By the time everyone was seated, it was nearly a half an hour after the point I wanted to start. No plan survives the first moments of battle.

Still, things got underway and we discussed way that we could streamline things for the next time. Bill was very patient with me, a skill any one of my co-workers can tell you is a necessity when dealing with my scatter brained absent minded behavior. I shall not soon forget the pained expression I saw a few time on Bill’s face when I would say something and he would hiss through his teeth and say, “Orrange, we _can’t_ do that.” 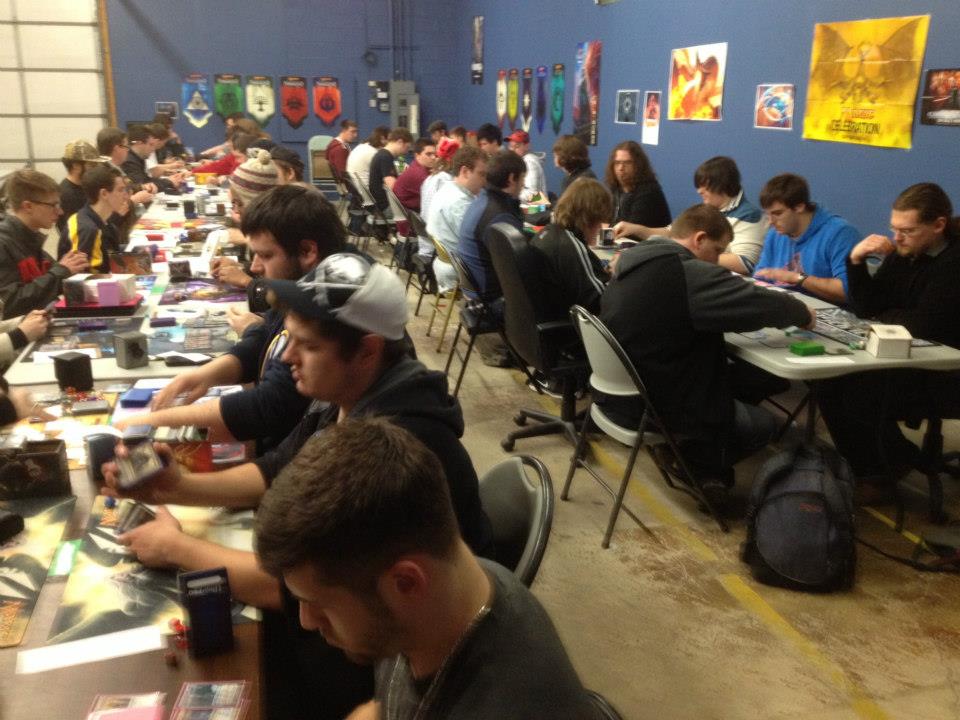 He was the master and I was the student in this place. At FNM, I can play fast and loose, but this was a GPT and in addition to the three round by, Dave and Adam’s Card World was putting the winner up in a free hotel room.

We ordered pizza after a few rounds and then ordered more pizza because damn Magic players can EAT! There were rule questions and only one real dispute caused by an inexperienced (total time spent playing Magic = 3 weeks) player mishandling his cards. It was frustrating on both side, but it was also the only really not fun part of the night.

I had never run 6 Swiss around in an event before (having only done FNM, Celebration, Pre-Releases, and Game Day) so by the time we were done raffling off door prizes and the Top 8 came along I was feeling kind of loopy. You can only watch people play Magic The Gathering for so long before you mind begins to go soft. Fortunately, once again, Bill kept it together, though I nearly fell over when he told me that the Top 8 rounds weren’t timed.

In the end though, Sage Price (an FNM regular at Dave and Adam’s) walked away with the top place and I was surprised how much pride I took in one of “my players” getting the top spot. I might always be a casual player, but I enjoyed my time watching the world of true competitors do their thing. In the spirit of that, I present you the deck lists of all the Top 8 players from this first Grand Prix Trial, I understand you guys like this kind of thing. Now, I have to go back to playing with my Several Samurai EDH deck. 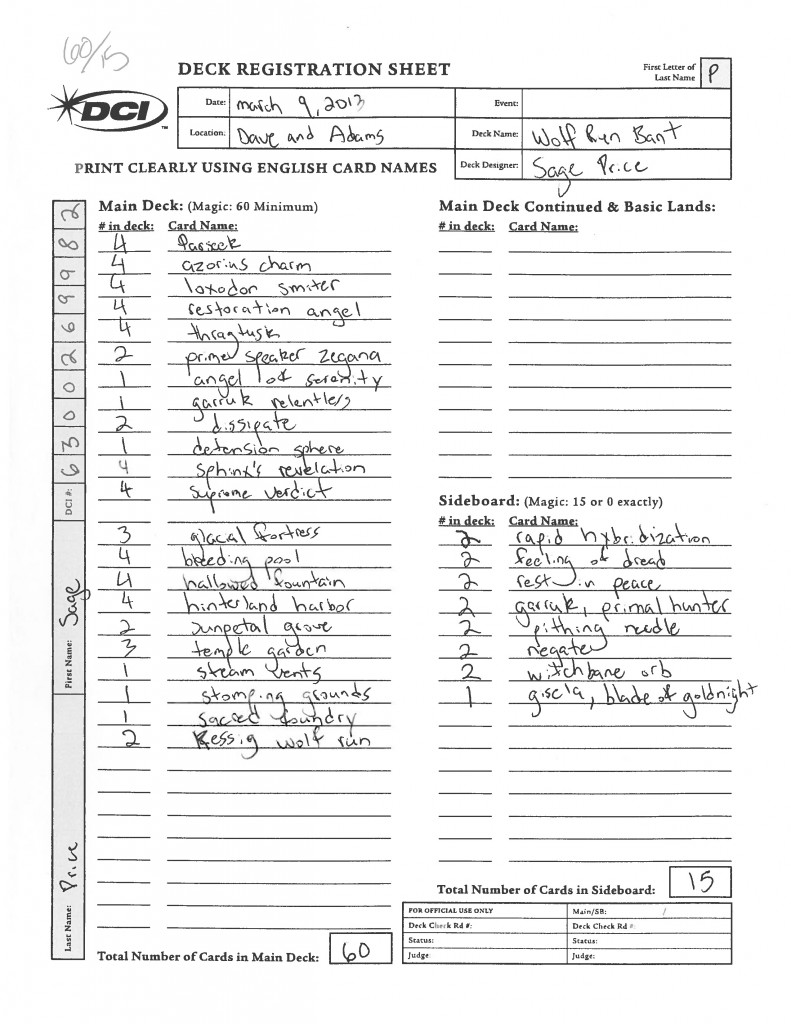 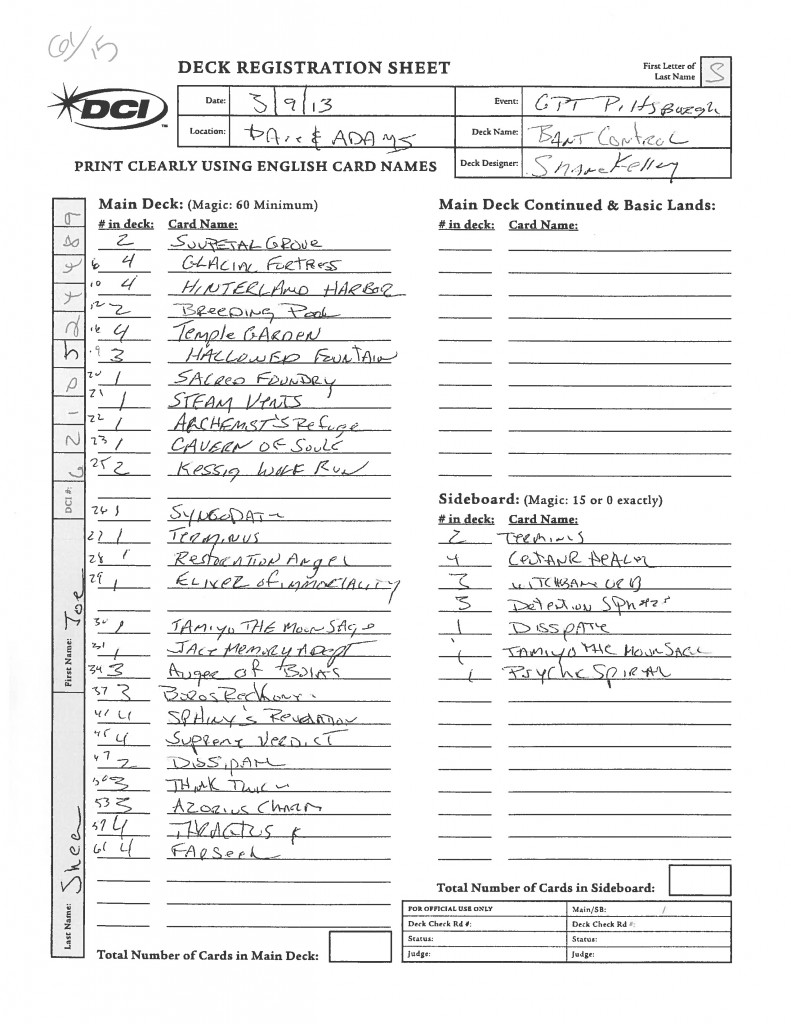 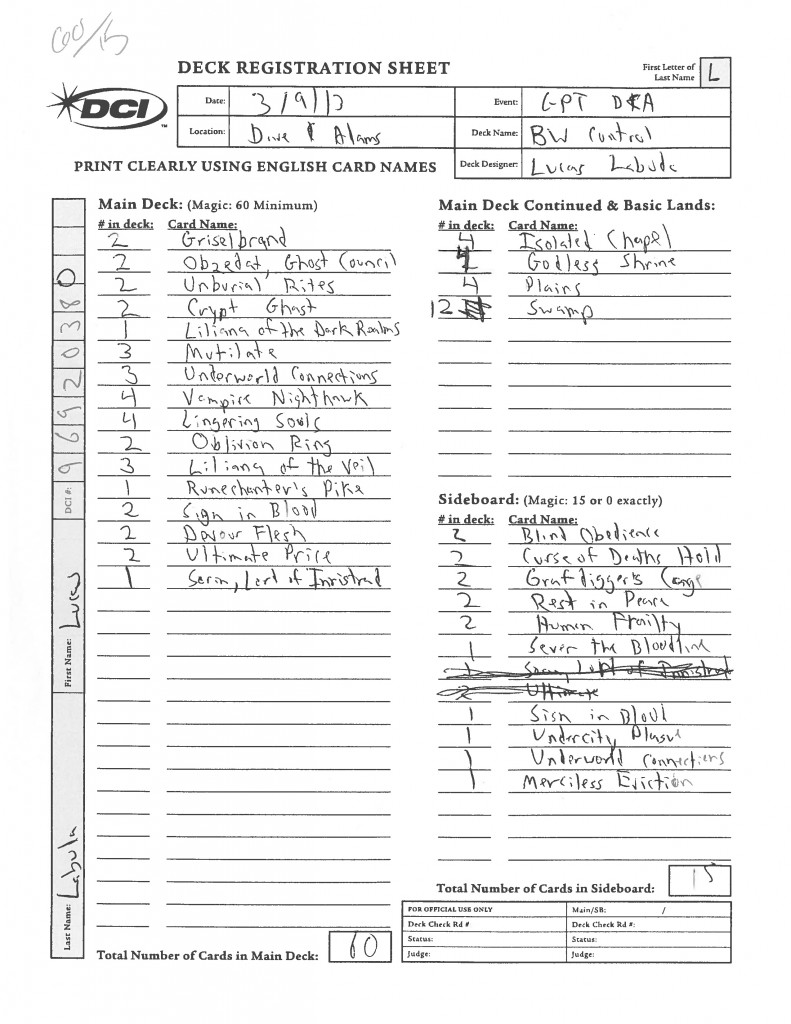 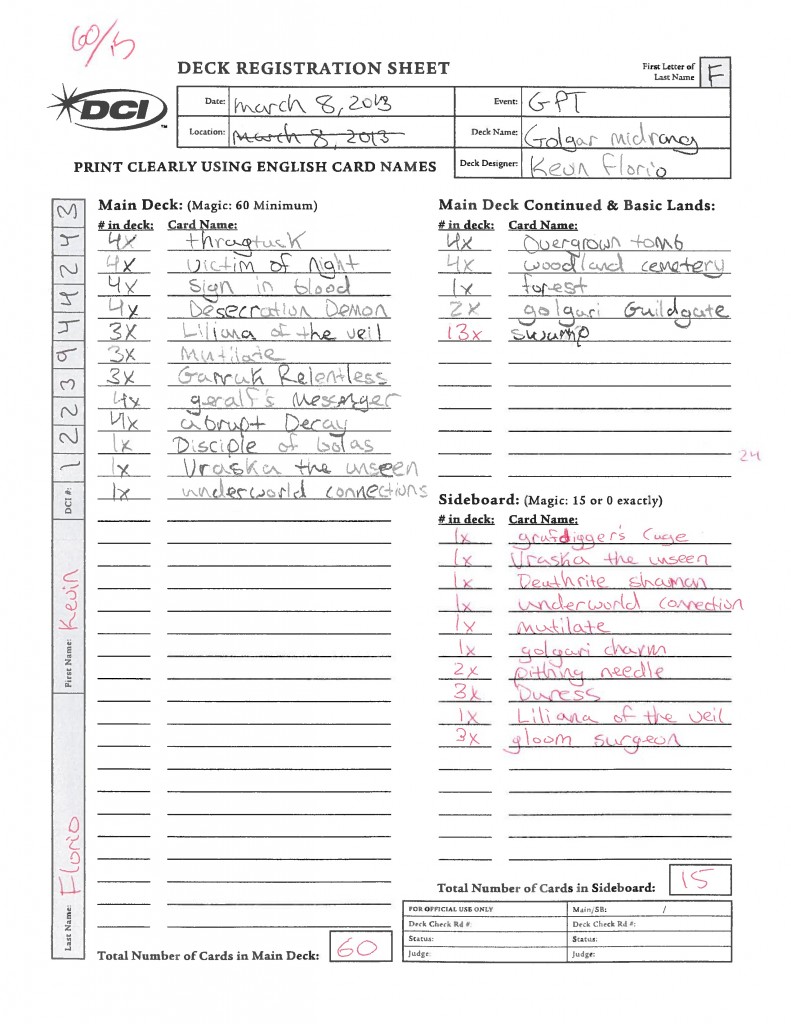 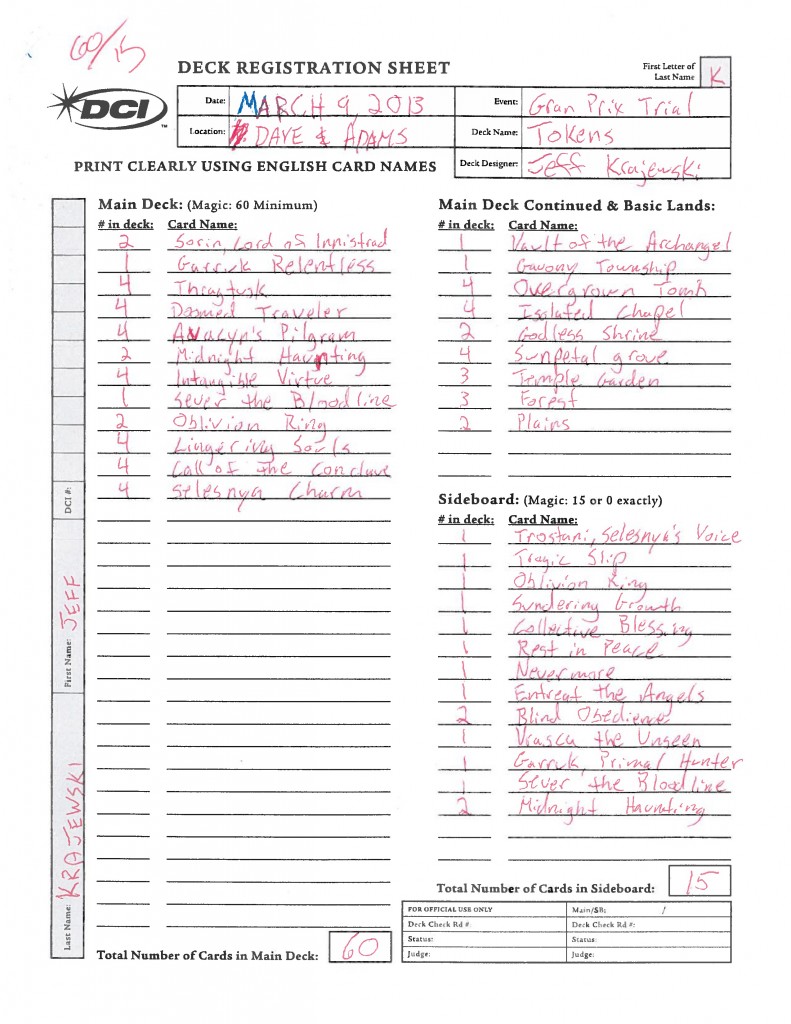 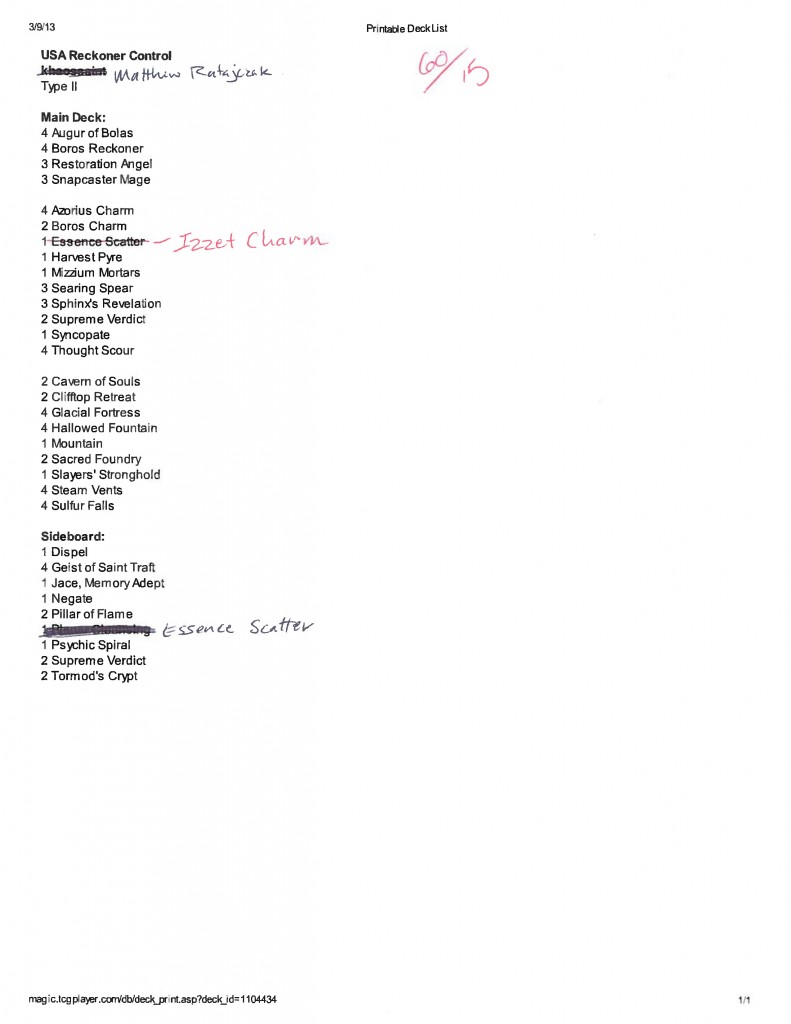 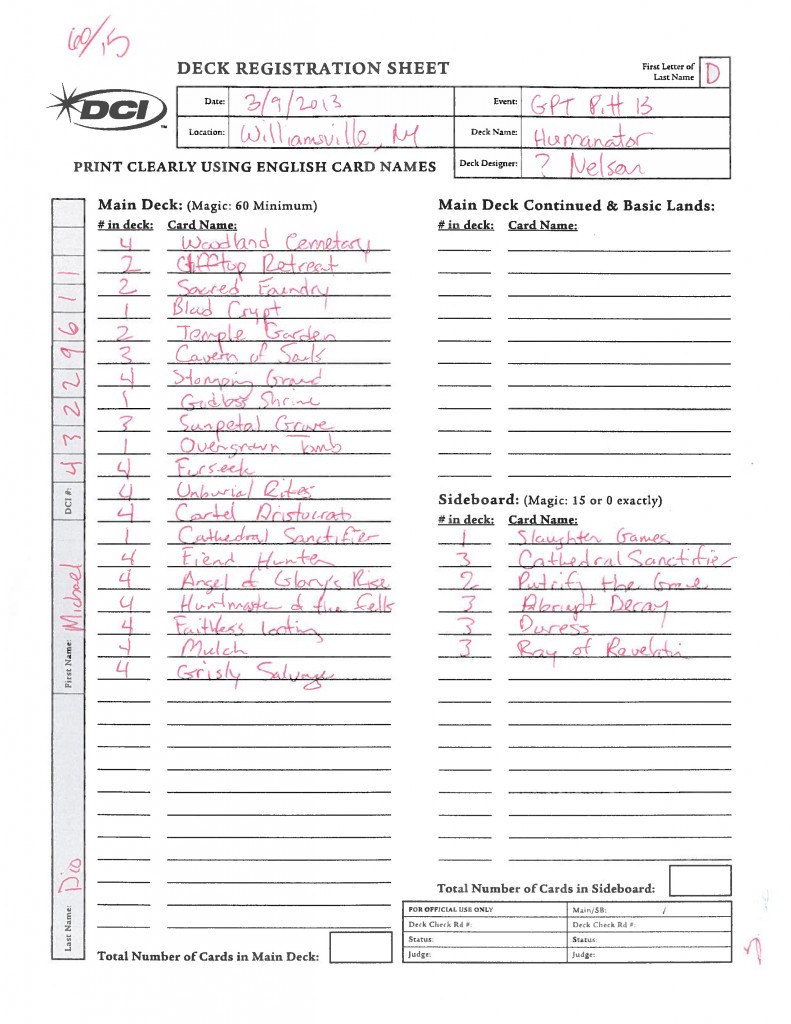 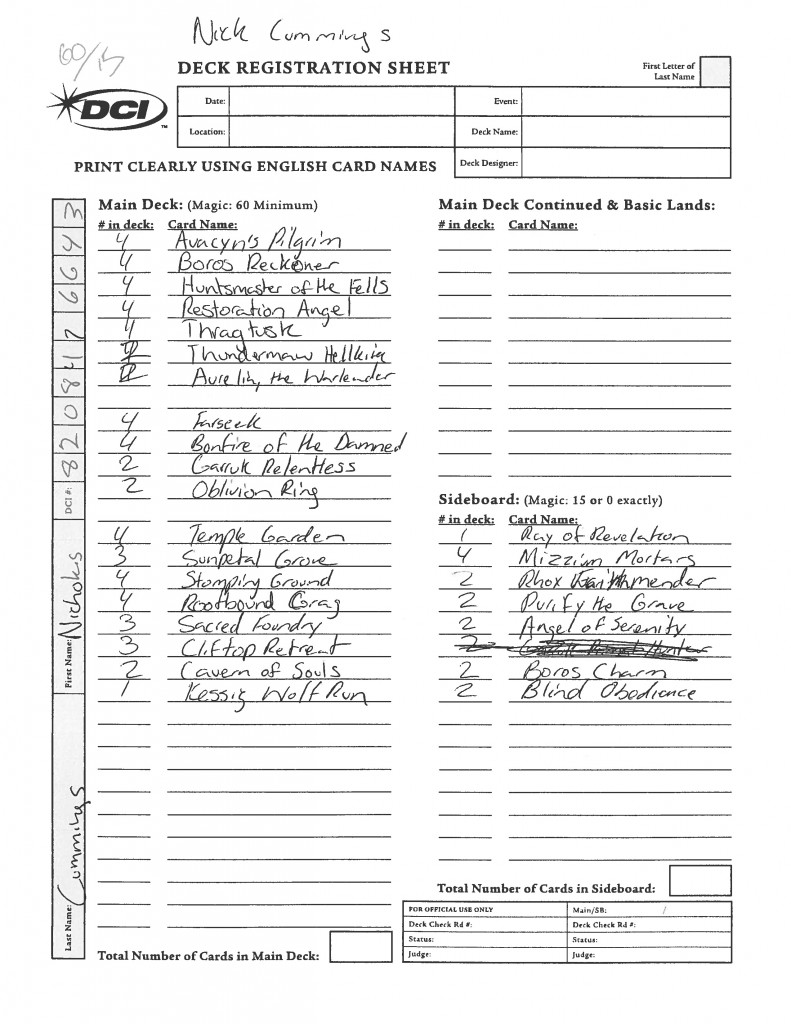