DA Drops is back like it never left. After a fantastic weekend of sports, we’re here to show what we have to look forward to this week in sports cards.

I think we’ll do things a little differently this time. We usually go sport by sport, but I think we’ll showcase the companies this time instead.

Grab some packs to rip while reading through this one. First up, Leaf!

Leaf has some baseball for us this week. Let’s check it out!

This Friday, April 27, Leaf is releasing its 2022 Autographed Baseball Edition.

Leaf says this release includes a fun mix of Hall of Famers, current superstars, future stars, and a couple of non-baseball surprise signatures.

Each box will contain one signed official MLB baseball. Each case will have six signed baseballs.

Panini is unleashing some new product. We’re expecting the release of some baseball, basketball, football, and MMA from one of the hobby leaders. Let’s see just what they have in store.

A higher-end football product is due to release Wednesday, April 27. It’s the return of Panini One Football with the 2021 edition.

Panini says One will bring collectors one encased on-card auto per box, continuing the success from previous years.

The on-card autos will be from top NFL rookies, legends, and current stars.

Chaseable opti-chrome inserts include Once Upon a Time Signatures, Precision Rookie Patch Autos, and Formula One Autographs.

A familiar brand to basketball fans in the hobby, Revolution Basketball will offer a variety of autographs, parallels, and inserts when it releases on Wednesday.

This release comes at the perfect time, as we are in the thick of the first round of NBA Playoffs that features NBA Rookie of the Year Scottie Barnes and his squad, the Toronto Raptors.

There are eight packs per box and five cards per pack.

We’re taking you out to the ballpark with 2022 Panini Donruss Baseball due to hit shelves Friday.

Each box will have two autographs and a memorabilia card of fan-favorite players, legends, and star rookies.

The product features a plethora of other Prizm parallels, Panini says. New insert sets, Bonus Machines, and Prizm Flashback are also in the retail box.

New to 2022 Prizm UFC is unique parallels in Ruby Wave, Hyper, and Ice. Collectors, keep an eye out for a roster of rookies appearing in their first officially licensed UFC trading cards.

The NFL Draft is coming up toward the end of the week, and we are looking at the release of 2022 Sage High Series Football, with each box containing 16 total autographs.

Sage says collectors should look for gold-level autographed cards numbered to 100 and blue level 1/1 base autographs for every player.

You can also collect Next Level Signatures featuring on-card autographs and foiled parallels from top prospects.

Peak Performance Liquid Foil base, parallel, and autograph cards are also available, along with Artistry cards with parallels and auto versions.

High Series Football is 16 packs with seven cards per pack and will hit shelves Friday.

It looks as though Topps is also getting in on the pre-draft football product action with the drop of 2022 Bowman Chrome University Football on the 27th.

Topps says it’s brand new to the family of Bowman products and is debuting with a “booming list of football’s brightest young stars.”

According to Topps, Bowman Chrome University is a 100-card base set showcasing the top talent throughout college football. Topps says it also includes “sleek inserts and parallels.”

Collectors should also look for 2000 Bowman and Big Kahuna inserts.

Wizards of the Coast

Magic fans are anticipating the release of the new Streets of New Capenna set.

This release comes in the form of Set, Draft, Bundle, and more.

We’ll break down each one for you below. Check out the details of the Streets of New Capenna:

Look for these cards: 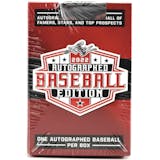 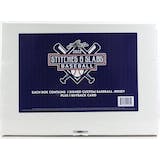