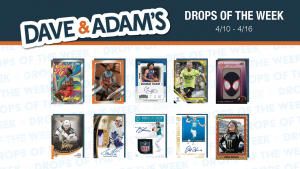 Another week, another edition of DA Drops! It looks to me that there are a plethora of products due to hit shelves this week across the board.

Since the NBA Play-In Tournament starts on Tuesday, let’s talk about what Topps and Panini have for the hardcourt this week.

Topps says it is bringing collectors a first this week. There will be a Chrome product of 2021/22 Overtime Elite Basketball, due to release on Friday the 15th.

According to Topps, they are making an “exciting return to the Basketball trading cards for the beloved Topps Chrome brand.”

What’s Overtime Elite? Well, Topps just so happens to have the answer for that.

Overtime Elite, also known as OTE, is a “transformative new sports league under the umbrella of Overtime and its 55M+ followers across social platforms,” Topps said.

It offers 27 of the world’s top young basketball players the opportunity to turn pro, earn six-figure salaries, and develop as players and brands as they prepare for the next level. All while players “compete against top domestic and international competition,” Topps added.

The company tells collectors to look out for the first cards of “Basketball’s future stars,” including projected lottery picks like Jalen Lewis, Jean Montero, and Ausar Thompson.

There are two chrome autos per box, with a refractor every three packs in the product. Also, look for Topps 1969 and, SuperFly inserts.

2021/22 Chrome Overtime Elite comes with 18 packs per box and four cards per pack.

On the Panini side of the court, collectors will see the return of Contenders Basketball with its release on Wednesday.

2021/22 Panini Contenders Basketball is returning to celebrate the 75th Anniversary of the NBA. In this product, you will see the top rookies with on-card autographs in the form of the Rookie Ticket Autographs.

I can’t forget to mention that Panini will also have the Veteran Season Ticket autographs, with parallels, including the “Premium Edition Gold Vinyl 1/1.

Panini says hobbyists can also collect various inserts in 2021/22 Contenders, including the “rare Hobby exclusive” Permit to Dominate and License to Dominate.

Contenders Basketball will have 12 packs per box and ten cards per pack.

The NHL is also nearing the end of its regular season and is skating into the playoffs. So what better time for new Upper Deck releases.

Wednesday marks the return of one of the ultimate hockey product classics in 2020/21 Upper Deck Ultimate Collection Hockey.

Upper Deck says there are five parallels to the vets and legends, including Auto, Gold Auto, and Onyx Black Auto, not to mention the all-new Jumbo Patch and Jumbo Auto Patch variants for legends and vets.

The company also says collectors should look for one-of-one Shield Patch and Shield Auto Patch parallels of the vets.

As for the rookies, Upper Deck says there are 100 “true rookie cards” via the two-tiered and serial-numbered Ultimate Rookie Autos subset.

“Look for Auto Patch parallel cards numbered as low as 49 and keep an eye out for Jersey, Jumbo Auto Patch, and 1-of-1 Shield Auto Patch variations,” Upper Deck said.

The Ultimate Introductions insert set returns as well, according to Upper Deck. Upper Deck says collectors can find up to seven parallels, including the Purple, Onyx Black Auto, and Purple Auto parallels. All of which are #’d 15 or less.

The new NHL Legacy memorabilia insert set “features players that come from families with at least one other NHL player in the family tree. Look for Bronze Patch and Gold Tag parallels including autographed versions, each of which is #’d to 25 or less,” Upper Deck added.

To the gridiron we go, switching back to a Panini release of the 2021 rookie class.

2021 Panini Encased Football, loaded with autographs and memorabilia from all the best rookies and legends, is due to hit shelves on Wednesday the 13th.

Panini says collectors can find two autographs in a box, one of which will be graded by BGS, and two memorabilia cards per box on average.

Not to be outdone by the autos are the oversized memorabilia cards in sets like Substantial Swatches, Substantial Rookie Swatches, and Gamers Jumbo Jerseys.

New to this edition of Encased is Sapphire Signatures, “featuring a huge checklist, and a bold on-card autograph,” Panini said.

Going from football to soccer seems to be an easy transition in these drop blogs. So, if it’s not broken, let’s not fix it!

Topps is back with its inaugural release of 2021/22 Topps UEFA Champions League Collection on Friday.

The company says to collect the best of the best in the 200-card base set and all-new inserts. Inserts include Road to St. Petersburg and 1975/76 Topps Footballers.

Well, well, well, something that doesn’t always grace the pages of our drops blogs, we get some racing this week!

Donruss features multiple base sets, inserts, and autograph checklists to give collectors a wide variety of content from their favorite drivers, Panini says.

Collectors should be on the hunt for Timeless Treasures Materials Signatures, a five-card set that features a race-used memorabilia piece and autograph.

On average, a box will have one autograph and two memorabilia cards. Look for autographs and memorabilia from racing prospects like Hailie Deegan, to superstars like Kevin Harvick, to racing legends like Jeff Gordon.

It’s a 90-card base set with parallels highlighting scenes from the film, Upper Deck says.

The chase hits in this product include:

There are 15 packs per box, with seven cards per pack.

Hopefully, you’re not exhausted because we’ve got a few gaming products to share to round out this week’s drops!

Below is a look at the Digimon Ultimate Ancient Dragon Starter Deck coming out on Friday:

“A pre-constructed deck themed around the fan-favorite Imperialdramon Dragon Mode! This deck includes Blue and Green multi-color cards, which can be powered up with Set 8 -New Hero-!”

And this is the Digimon Parallel World Tactician Starter Deck:

“A pre-constructed deck themed around fan-favorite Mastemon! This deck includes Yellow and Purple multi-color cards, which can be powered up with Set 8 -New Hero-!” 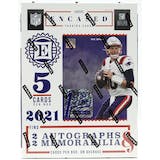