The Summer sun is shining, the Colorado Avalanche dethroned the Lightning in the Stanley Cup Finals and to top it all off, we have some awesome releases coming your way this week! Let’s get into it!

One of the most sought after Upper Deck Hockey products, 2020-21 SP Authentic Hockey maintains the key features of the brand, with high end cards and sets in this coveted collection.

Every box contains, on average, one Autographed Future Watch Rookies card and an additional autograph card.

Many of the popular SP Authentic insert sets collectors have come to know and love are back, including Sign of the Times, Immortal Ink and Marks of Distinction. Included amongst the various Sign of the Times sets is the “Decades Collection” featuring hard-signed autographs from over 40 retired legends.

With 70 years of excellence and tradition leading up to 2021, Topps is rejuvenating possibly the most iconic Topps design of 1952, for this 2021 Topps Chrome Platinum Anniversary celebration!

Build the eye-popping 700-card Base Set, featuring players from throughout 70 years of Topps Baseball cards, and collect them across an extensive rainbow of color parallels!

Each Box contains One Chrome Autograph and One X-Fractor Parallel!

One of, if not the most, diverse sets under the Panini umbrella – Chronicles is making it’s way back to the pitch! 2021/22 Chronicles Soccer includes more than 15 Panini brands combined into one release!

Collect cards from all the LaLiga, Premier League, and Serie A teams from popular brands such as Prizm, Certified, and Spectra!

Look for numerous parallels of each brand in 2021/22 Chronicles Soccer including one-of-ones and memorabilia parallels.

Look for signers from the past and present of the LaLiga, Premier League, and Serie A in inserts such as Noir Spotlight Signatures and Contenders Autographs.

Hunt for two different autograph and memorabilia inserts in Silhouettes from Crown Royal and the eponymous Cornerstones!

Chronicles isn’t the only Soccer product dropping this Wednesday though and this one is a big one!

Topps Museum Collection is back and bringing a touch of luxury and sophistication to UEFA Champions League trading cards yet again with this 2021/22 collection.

Collect a variety of premium Autograph and Relic cards such as the all-new Rookie Reverence Autographs or the ultra-rare Museum Framed Autograph Patch Cards.

Hope you didn’t get your Chronicles fill with Soccer on Wednesday because this Friday we see the release of 2022 Panini Chronicles Draft Picks Football!

Chronicles Draft Picks is back with a plethora of the best Panini brands of the most sought-after players in the 2022 NFL Draft!

Every box should have 3 autographs, 1 memorabilia and 12 opti-chrome cards per box on average!

Chase on-card opti-chrome autographs of some of the top prospects!

Time to hit the octagon! 2022 Select UFC releases this Friday and includes a variety of hobby-exclusive parallels to pull, including iconic Gold Prizms and Black Prizms!

New in 2022, chase the super-short-printed Artistic Selection insert, falling less than one per hobby case, on average!

Search for a snapshot in history with And NEW! — highlighting the moment 10 UFC stars became champions! 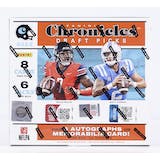