After a weekend in the octagon where Paddy the Baddy won by submission, we’re celebrating with a new edition of DA Drops, including the release of a Panini MMA product.

Every Fortnite player, past or present, is psyched with the temporary suspension of building in the game. So players may also be happy to hear that Panini is also releasing some new Fortnite this week.

Let’s check it out!

Panini’s bringing back Prizm to the UFC with a “plethora of Prizm parallels,” 22 per box to be exact, and two autographs per hobby box on average.

There are new parallels in the 2022 Prizm UFC. Ruby Wave, Hyper, and Ice, according to Panini. Additionally, there are new insert sets called Bonus Machines and Prizm Flashbacks.

Panini says UFC champs will show off their gold in the returning Champion Signatures. Also, there will be a roster of rookies appearing in their first officially licensed UFC cards.

Players may start doing some Fornite emote dances when they hear the news that the Series 3 hobby box of Panini Fornite trading cards is due to hit shelves on Wednesday.

There are 332 different cards to collect, according to Panini, with brand new “double-sided wrap cards.”

“Wrap cards showcase the numerous customization options for your weapons!! Look for 35 of these cards that all feature a different wrap on the front and back,” Panini said.

Collectors should look for revamped Outfit and Harvesting Tool card designs that “showcase the style of Fortnite.”

“The quintessential Fortnite tool gets a design upgrade with 65 double-sided cards to collect,” Panini added.

There are also 232 new Outfits, including 23 Legendary and nine from the Frozen Series.

Fortnite Series 3 has 24 packs per box and six cards per pack.

Technically, this product on our list is baseball and non-sport, but we’ll put it under the baseball tab.

Saturday will see the release of the 2022 Historic Autograph Supreme Rewind.

In terms of the baseball packs, Historic Autographs says there will be popular rookie cards from the 1970s, including Mike Schmidt, George Brett, Robin Yount, Dave Winfield, Rickey Henderson, and Cal Ripken.

Non-sport packs will include roughly 50% Star Wars trading cards and stickers from 1977 to 1983. Other popular series in Supreme Rewind include Raiders of the Lost Ark, KISS, Battlestar Galactica, and The Incredible Hulk.

Collectors will find one PSA or BAS autograph card, five 10-card baseball packs, and one 10-card non-sport pack per box.

There are only 1,000 serial-numbered boxes, and every card is serial numbered in the Stickrack Update product.

Game Used Stickrack Update Hockey is due out on Friday, March 25.

We’re ending this week’s drops with a Leaf football product also set to drop on Friday.

Leaf says this product is its first offering in the college football space.

It will feature a selection of college football’s “hottest” players and “some of 2021’s hottest pro football draft picks.” 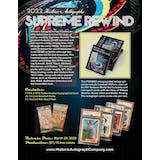