This past week, there have been some epic pulls from the 2020-21 Panini Prizm Football Hobby Box. Friday morning, “The Chase” crew got to speak with the winners of the Mac Jones black finite 1/1 rookie auto, Chad and Johnny Stone.

What makes this even more unique, is that the one who pulled the prestigious card, Johnny, is only 13 years old. Johnny and his father, Chad, run Stones_Sports_Cardz on Instagram and are big-time collectors.

The 1/1 pull by Johnny drew a great reaction on Facebook and social media, as the 13-year-old was audibly excited, screaming “let’s go!” after revealing the card.

The Stone’s recently sold the card for a whopping $100,000, which Johnny said he used part of the money to buy himself a gaming PC. 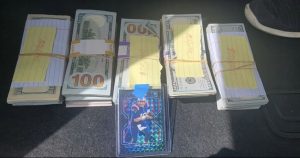 Johnny and Chad added that the young guy has had good luck with cards, pulling a $20,000 LaMelo Ball during a break, in addition to two other higher-standing Ball cards. Johnny also said he once pulled a high-end Justin Herbert card from the 2020 Panini box.

As far as interest in the hobby, Chad said he began collecting at a young age and eventually, once Johnny was born, he progressively began passing it down to his son.

“I started, as he was playing sports, I’d offer him a box of Pokemon or a box of sports cards if he did well during soccer,” Chad said. “I noticed he played a lot better if I offered him something like that. And it just took off from there.”

Chad added, one day Johnny was grounded and he gave an old collection of his cards to his son so he could look up the values. Eventually, they agreed to sell them online and split the costs, leading to Chad making the duo’s interest into a legit LLC.

The interest in the hobby eventually led to the creation of stone_sports_cardz.

“I sold a lot of stuff at the flea market with my grandpa. I sold cards there so that was my main selling point, because back then I didn’t have a phone or anything to sell online. Then, once I got my phone, then I was able to list stuff on eBay and sell stuff on Facebook and Instagram and all that stuff,” Johnny said. “Then one day my dad called me and said he created an LLC, which is nice.”

Going back to the reaction, Johnny said he didn’t even realize the card was going to be what it was, and it happened very quickly.

“If I would’ve seen a black finite, I would’ve just slow-rolled it, but I just figured it’d be another Prizm pack where I’d probably get a silver of a vet that you’ve never heard of or a numbered of a vet that played 20 years ago. But then I saw the Mac Jones and I got excited,” Johnny said.

He also added, the card was just from a local shop, where he bought three boxes.

Meanwhile, Chad was not home at the time of the break, but still got to witness the reaction live on social media.

“The coolest part about the whole thing is normally we pre-order that Prizm or other product and we’d pick it up and just break it together at home,” Chad said. “I had a busy day that day, and he picked up the boxes and he’s like, ‘I want to open them,’ and I said ‘That’s fine, just go live so I can watch. … For him to hit that card live and have the recording of his reaction, I keep saying, is the most priceless thing. … That memory, that moment on recording is the most priceless thing from a father’s standpoint that I can ask for.”

With the big pull has come some fame for Johnny. He said he’s had a ton of people reach out to congratulate him and wanting to talk about the card.

“It’s crazy. I didn’t expect this Friday when I bought the boxes and opened them. I went out of town that weekend and my mom, she was happy I hit the card, but (mad) I was on my phone the whole trip because I was getting so many notifications,” Johnny said.

In addition to purchasing the gaming PC, Johnny said he put the rest of the money away in savings. 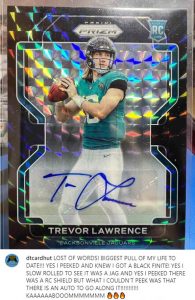 Dave started collecting back in the early 90’s. He said he remembers there was a corner Bodega near his house as a 12-year-old and they used to sell loose packs of cards. Back then they were mostly Upper Deck, Fleer & Skybox.

After a couple years, Dave stopped. Fast forward to 2018, he drafted Saquon Barkley in a fantasy football draft and he did well that season and Dave decided to pick up a Saquon rookie card to “commemorate” his great season. Sure enough after looking, he said the hobby changed so much.

Going through the T-Law 1/1 pull, Dave said he opened the Prizm pack, peeked the cards edges and saw there was this shiny black card sitting at the very end of the pack. He said he knew it was a black finite, but with this year’s Prizm set of 440 players, he didn’t get his hopes up. After going through the vet bases and the two rookie bases, there was a Kurt Warner purple out of 125 covering the black finite. After slow rolling it from the bottom to see the team, it said Jacksonville Jaguars. Dave then slow-rolled it from the bottom to see if it was a rookie and saw the RC logo. He continued to slow roll it and, boom, it was Trevor Lawrence. Dave quickly revealed the rest of the card only to notice there was an autograph as well.

Dave said, “I legitimately didn’t know how to process this and I put it in the penny sleeve and ran over to the next room where my wife was. I was speechless and just trying to catch my breath and she looked at me and said what happened to you? I couldn’t talk and just showed her the card. And her initial reaction was like ‘Why’s this so special than your tons of other ones?’ Man, that was priceless.”

After saying it was the pull of his life, he still agreed and said a Kyler Murray 2019 Impeccable rookie helmet patch auto first off the line exclusive out of 19 is a close second.

Dave said he handed the card off to Goldin Auctions and it will be auctioned off at Goldin’s National Elite Auction and also be featured in their national booth. And after failing to video his pull, he said with a laugh, he’ll likely start filming his pulls from here on out.