The Time We Broke 2020/21 Panini Flawless With Drake

By Tyler Prigionieri on March 29, 2022 in DACW Live Breaks

Western New York’s own Dave and Adam’s participated in an over $650,000 basketball card “break” with international recording artist and entrepreneur Drake on Sunday night in Toronto, Ontario.

Drake, along with Ken Goldin of Goldin Auctions spent over four hours on Goldin and Dave and Adam’s Instagram live feed opening up basketball card boxes including 10 cases of 2020-21 Panini Flawless Basketball cards valued at $400,000 provided by Dave & Adam’s. Among those that joined the feed included YouTube star and fellow collector Logan Paul, music producer and DJ Steve Aoki, rapper Paul Wall and many other entertainers and athletes.

“We want to thank Drake and Ken Goldin for working with us and allowing our company to partner with such an industry-changing event for our hobby,” DACW Owner and Founder Adam Martin said.” As our hobby continues to grow, it is amazing to see the excitement and passion that someone like Drake can bring to the table as they become new card collectors. This is the first time that Drake has participated in a live break of cards in-person and we are so happy Dave & Adam’s was chosen to be a part of it.”

Let’s breakdown the highlights of the night with a timeline of this historic hobby event!

11:30pm ET – Ken Goldin goes LIVE with Drake on Instagram Live and begins the break by opening a box of 1986 Fleer.

11:37pm ET – Drake opens his first ever pack of cards in the hobby, and after switching which pack would be his first – he pulls a Michael Jordan rookie!

12:13am ET – Internet Sensation, Logan Paul joins the Instagram LIVE to congratulate Drake on his inaugural break in the hobby.  He then makes a joke about how “BBCE got that box right”, poking fun at his fake case of 1st edition Pokemon cards.

12:14am ET – Right after Logan Paul left the LIVE, Drake pulled his second Jordan Rookie card.  He was now up 2 Rookie cards & a sticker that he pulled. 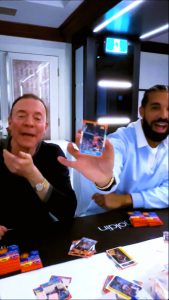 12:20am ET – Ken shares with Drake, that in 1988 – Ken walked into a KB Toy Hobby and the 1986 Fleer box was priced at $4.99. Now the box is valued around $300K. Drake goes on to explain that it’s a good lesson in this digital age to do your best to preserve hard assets – that might not have value now – but if you have the discipline to hold onto it instead of selling right away, it might be worth it in the end.

12:44am ET – As the team is packaging the 1986 Fleer cards to prepare for Flawless, Drake talks about how he thinks the hobby sleeps on how important the gum might be in 10 years, similar to how Bitcoin was slept on.

12:52am ET – As Dave & Adam’s Card World joins the Instagram LIVE, Drake introduces & congratulates the Canadian Soccer team into the stream – who made it into the World Cup!

1:15am ET – The Instagram Live experienced some technical difficulties – so the team worked on getting the issue resolved to get right back into Flawless.

1:30am ET – Ken & Drake kept the cases going by being live on DACardWorld until Ken’s stream was fixed.

1:45am ET – Ken’s Instagram Live stream is back! Drake asks Ken if he has ever had a side fade haircut, and recommends his barber gives him one in the future.

1:52am ET – Dave & Adam’s Breaker, Troy Licastro joins Ken Goldin’s Live to break flawless with Drake. Drakes pull after Troy sits down…1 of 1 Penny Hardaway Logoman! Troy may just be a good luck charm as this was the only logoman of the night.

2:15am ET – Drake opens the last case of Flawless for the night, and while it didn’t hold the Lebron Triple Logoman; it had Toronto’s 2019 championship savior Kawahi Leonard 10/10. The last card was Charles Barkley, who had been following Drake all night.

Well, that about sums it up! What an amazing night for the hobby! Thank you again to Drake and Ken Goldin for allowing Dave & Adam’s to be a part of this industry-changing event.

The new collector and enthusiast has been opening up the popular Flawless boxes looking for a unique “Logoman” card featuring a game-used jersey patch of LA Lakers star Lebron James with an estimated value in the millions of dollars. Many of the cards that were “pulled” in the live break by Drake will be auctioned off by Ken Goldin and Dave & Adam’s with proceeds going to the charity of the artist’s choosing.

View all posts by Tyler Prigionieri →