By Dave and Adam's Card World on February 6, 2013 in Sports Card News and New Products 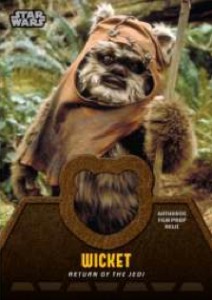 When Topps first released Star Wars cards in 1977, the only inserts were stickers. It stayed that way for decades before giving way to chromium cards and other basic inserts in the early 1990s. The natural progression led to actor autographs, low-numbered parallels and some of the hobby’s most popular sketch cards. But there has never been a set of Star Wars trading cards to offer memorabilia used in the making of the film. Until now.

2013 Topps Star Wars Jedi Legacy will have three relics that have items used in the original trilogy. Chewbacca’s hair, Ewok fur and a piece of sail from Jabba the Hutt’s barge are among the keys to the release. They’re not the easiest pulls. The Ewok relic falls 1:5 boxes. The Sail Barge is 1:14 boxes. Chewbacca’s fur is the toughest, inserted 1:30 boxes.

While these are the first pack-inserted Star Wars memorabilia cards, they aren’t the first-ever. That distinction goes to a promo card inserted in a special variant issue of Non-Sport Update Magazine. Released in 2010, the issue had a card with a piece of Ewok fur. The card was produced by Topps and is fully licensed.

Relics aren’t the release’s only hits. Topps Star Wars Jedi Legacy comes with one film cel card in every box. Another first for the franchise, each of these cards has a piece of the original movie embedded into it. There are also double- and triple-frame versions.

Every box of the hobby-exclusive release has a single-cel card and either a relic, multi-frame film cel card, autograph or printing plate.

The focus of the base set is on the stories of Luke Skywalker and Darth Vader. Each has their own 45-card checklist. They’ll be numbered ‘A’ and ‘B’ series, similar to Topps’ Garbage Pail Kids.

Topps Star Wars Jedi Legacy is scheduled for release in May. With many long-time Star Wars card collectors hungry for memorabilia cards, this should be one of the franchise’s most exciting sets ever. 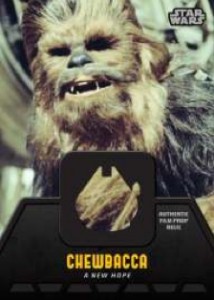 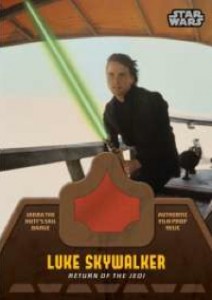 Dave and Adam's is one of the largest sellers of trading cards and collectibles in the world. Located just outside of Buffalo NY, the company operates two retail stores as well as the e-commerce website www.dacardworld.com
View all posts by Dave and Adam's Card World →
180 T206 Baseball Cards Just Added to the Site!
Legendary Comic Buyer Mike Carbo Joins Get Cash for Comics Buying Team