Reach into the Vault during National week 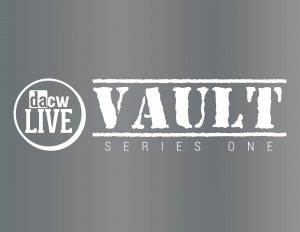 Whether your passion is sports, comics, or toys, among other things, they’re constant reminders of why collecting is beloved by many. We, the breakers, are among the many who love to collect different things. Sean collects everything, seriously he is all over the place. Alex collects concert posters and obscure sports cards. Troy likes to collect records, autograph wrestling memorabilia, and vintage clothing. In this line of work, it’s almost impossible not to be consumed by the many hobbies that are shared and enjoyed July which means the National Sports Card Convention is on the horizon. We know that each year the National brings some big and exciting news, which leads us to our announcement of the DACW Live Vault.

With that being said, July is nearing its last week, which means the National Sports Card Convention is around the corner. We know that each year the National brings some big and exciting news, which leads us to our announcement of the DACW Live Vault.

We’ve been brainstorming a lot in the Lounge lately, and we think we may be on to something. Sure we’ve seen our fair share of Hit Parades that include pop culture and sports, but nothing like what we’re going to unleash. There’s never been a product that encompasses and encapsulates collectibles ranging from autographed sports and pop culture items, single cards, boxes, video games, comics to action figures. However, that is all about to change. It’s come to our attention that there are many crossovers in the world of collecting, hence why we want to bring that crossover appeal to box breaking with our product.

The Vault will come to you live during the week of the National. Below are some things you can expect:

“Honestly I wanted to call this the 3 Men and a Baby break (the baby being the cases of course) but we are going with The DACW Live Vault. Maybe I can use the name for Series 2,” says Sean.

Sean proves that you never know what to expect during the National. So be sure to stay tuned for other surprises during our Vault breaks!

2017 Hit Parade Baseball Graded Card Edition – there’s no waiting for the hits!
Panini begins to lay out their plans for the 2017 National Sports Collectors Convention