The Guide to Detective Comics #27: The First Appearance of Batman 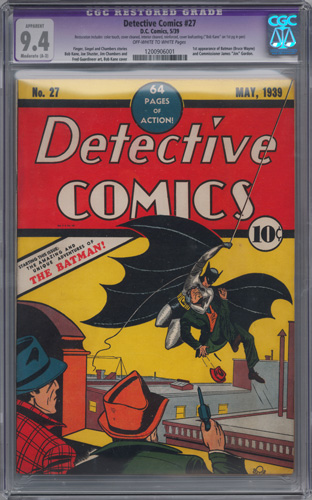 Detective Comics was changed forever in issue #27 thanks to the introduction of both Bruce Wayne and the Bat-man. The comic opens with the introduction of Commissioner James Gordon in his home talking with his friend Bruce Wayne about a “bat-man” that has been puzzling him. Upon finding out about a murder, the two drive off to visit the crime scene.

It turns out that a man named Lambert was murdered, with his son as the main suspect. Young Lambert insists that he had no hand in the foul play and that his father mumbled something about a contract as he was dying in his arms. Furthermore, Old Lambert had three main business associates: Steven Crane, Paul Rodgers, and Alfred Stryker. A phone calls comes into the scene of the crime, and after overhearing that the excited man on the other end was Steven Crane, Bruce Wayne scoots off into the night.

It turns out that there is debauchery occurring at the Crane house as burglars have killed Crane and are evacuating the scene of the crime with the possession of a paper. Then, upon the roof, the black caped menacing Bat-Man appears. He makes quick work of the criminals and grabs the paper in the process. However, he was unable to leave the scene before being spotted by Commissioner Gordon.

Meanwhile, Paul Rodgers catches a report of the incidents on the news and shows up at Alfred Stryker's home. However, Stryker's assistant incapacities Rodgers and places him within a gas chamber bound to kill him. Suddenly, Bat-man appears though a transom, plugs the gas jet, and smashes through the glass with a wrench. Bat-man then rushes the assistant and deals him a crushing blow.

By this time, Alfred Stryker hears the noise and shows up on the scene. He sees Rodgers alive and is too caught up in killing him with a knife to notice Bat-man, who is hiding in the shadows. Bat-man grasps the hand of Stryker, disabling the madman. Bat-man then reveals the plot of Stryker and how he was attempting to gain full control of the business when Stryker wiggles free and attempts to shoot Bat-man. A strong left hook from Bat-man sends Stryker reeling over the rail directly into an acid tank. Before he can even be thanked, Bat-man escapes out into the night.

Back at the commissioner's office the next day, Commissioner Gordon explains the report to Bruce Wayne who shrugs it off as a "lovely fairytale". As Wayne leaves the office, Gordon laments to himself about just how boring and distracted young Bruce Wayne is.

The final frames show Bruce Wayne entering a closet, only to come back out in the final frame revealing to the reader that he is in fact the Bat-man.

The copy of Detective Comics #27 acquired by Dave & Adam’s Card World is graded a 9.4 (A-3) -- not only the highest grade ever, but the highest score on restoration for the issue as well.

Where To Find It

The highest graded Detective #27 in existence! 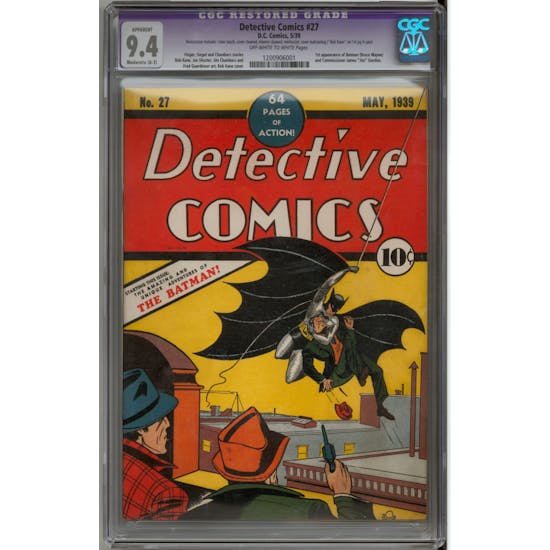 FREE BONUS In addition to the Detective Comics #27, whomever purchases this copy will also receive a run of Batman issues #1-36 at no additional charge as a special bonus gift. This Batman run was purchased from an original owner who themselves purchased these issues from a comic store in the 1940s.

Due to the high value of this item, we require that all interested parties contact us. Please call 1-888-440-9787 for information on how to purchase.

In the meantime, you can use the search box to find what you are looking for.