The 20 Most Expensive Comic Books Ever Sold

Looking to prove that comic collecting is more than just a hobby? Well we've compiled the most expensive comic books ever recorded based off of the purchase price. Selling prices for these super treasures are set based on the rarity and demand of the comic as well as the grading, most typically a CGC (Certified Guaranteed Company) grade.

The rarity and demand of a comic are usually determined by the comic's popularity and content. For example, the comic where Batman first appeared is highly desired, and will should a high price at auction. The grade of the comic is determined through an independent third-party grading company that documents any deviation from the comic's original mint condition.

Take a look at what people have paid to get their hands on some of the most valuable comics in the world:

This iconic comic is well noted for debuting America's beloved superhero-Superman. The comic also sets the stage for Superman's home planet of Krypton. This particular copy of Action Comics #1 belonged to actor and comic book aficionado Nicholas Cage before he sold it at auction for a record setting $2.16 million. Breaking the two million dollar mark with its astounding CGC rating of 9.0, this comic sets the bar for the highest price ever paid for a comic.

While this comic features the same iconic material as the most expensive comic in the world, it falls short of the most expensive price tag by $661,000 due to its lower CGC grade. The discrepancy in grades can be due to just a few small defects in the comic's appearance. For example, many 8.5 graded comics appear to have been read a few times and may contain small folds or creases, small chips on the cover, or minor surface wear. Who knew a couple careful reads of this comic could cost over half a million dollars? As you can see by the top two comics here, to date Action Comics #1 is the most expensive comic book to date.

Another superhero icon sells for a super price! This valuable comic is credited with the first ever appearance of Spider-Man, and sold for an impressive $1.1 million. What's more impressive about this copy of Amazing Fantasy #15 is its impeccable condition. It received a CGC grade of 9.6 which is considered on the higher end of the "Near Mint" spectrum. To receive this grade, the comic's paper must seem like new, the staples must be clean with no rust, and the printing must be vibrant with no surface wear. 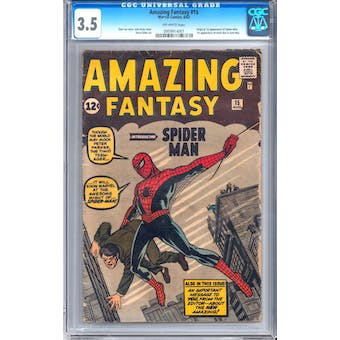 Detective Comics #27 is one of the most sought-after comics in the world for its debut of Gotham's dark knight-Batman. This comic also introduced Commissioner Gordon and Batman's alter-ego, Bruce Wayne. This is the highest ever graded unrestored copy of Detective Comics #27. What's more? The comic series, Detective Comics, is also how DC (Detective Comics) got its name which only increases the value of this treasure.

What has been noted as the most important comic book in the history of comic books sells again for a whopping $1 million. Rated at an 8.0, this comic is in "Very Fine" condition and likely has a few minor defects such as small folds, stress marks on the spine, chips on the cover, and some surface wear. Don't let the picky details fool you though! This comic is still a great collectible.

This incredibly valuable copy of Detective Comics #27 comes in as the second most expensive copy of the comic ever sold. Within the pages, Bat-Man investigates his first case at a shady Chemical Corporation. Graded at a 7.5, this comic falls short of the highest graded copy due to its off-white pages and other minor defects.

It's a bird! It's a plane! No-it's another copy of the monumental Action Comics #1! This particular copy managed to snag a hefty sum of $625,000-a reasonable price for its CGC grade of 6.5. At that grade, the comic is likely well-read with multiple minor tears, spills, and detractions from the original condition.

Similar to the 5 other pricey copies of Detective Comics #27, this one is highly sought-after. The difference in price tags, in this case, derives from the comic's condition. This comic was graded at a 6.0 which would be considered "fine" condition. The comic appears well-read and could have a large piece out of the cover, creases around the stapes, and off-white/yellowish pages. For a 6.0 of this comic, it fetched a pretty lucky auction price.

Similar to the other 6.5 grade Action Comics #1, this comic has minor faults in the quality of the comic. Regardless of the detractions, the comic still remains incredibly desirable and sold for over half a million at auction.

In this comic, when Bruce Wayne's parents are murdered, the young child vows to fight all criminals as the iconic Batman. Although this Batman #1 comic isn't the superhero's first appearance (Detective Comics #27), it is the start of the monstrous Batman industry. This important copy took over $567,000 at auction. 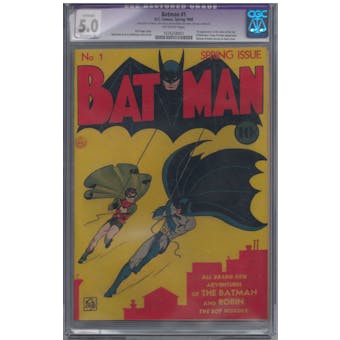 This 6.5 graded comic fetched less than the 6.0 graded copy of the same comic due to a boom in comic sales. A 6.5 comic is one step above a 6.0 although both conditions are considered relatively "Fine." The only differences one might see between a 6.5 comic and a 6.0 comic are a few more minor tears and more faded colors.

Similar to the #11 most expensive comic, this 6.5 graded comic managed to fetch less than the 6.0 graded copy of the same comic. However, being over a half million dollars, $522,813 is still quite the price to pay!

What's surprising about this comic is its price tag. Not because it's high, but because for a CGC of 7.0, it should have fetched more than the other Detective Comic #27s that were rated 6.0-6.5. Unfortunately, auction audiences always play a role in the selling price of a comic and this was sold in 2010, right before some larger sales hoisted the overall value of the comic through the roff. If there isn't a very interested buyer in the crowd, an incredibly valuable comic might sell for less than it is actually worth. The opposite can be said as well. If there are overzealous comic book aficionados at the auction, the price for a comic can sail higher than its actual value.

The X-Men #1 comic is known as the start to a beloved X-Men era. This particular issues also debuts these iconic characters: Professor X, Cyclops, Marvel Girl, Angel, Beast, Iceman, and super-villain Magneto. Another super element of this comic is its astronomically high CGC grade. At a 9.8, this copy of the comic may only have a slight stress line from the staples. Aside from that very minor defect, the comic should look as new as the day it was printed. It is extremely rare to see a valuable comic like this in such pristine and unrestored condition. No wonder it fetched nearly half a million dollars! 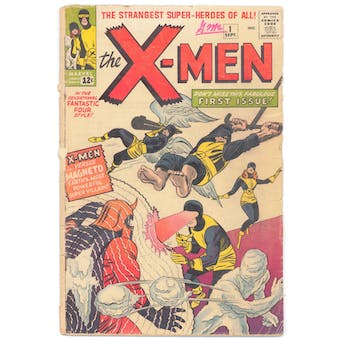 This copy of Flash Comics #1 is not only valued for its "Near Mint" condition, but the comic features the first appearances of superheroes the Flash and Hawkman. While these heroes aren't quite as renowned as Superman and Batman, they're clearly still held in high regard according to the nearly half a million dollar price tag. 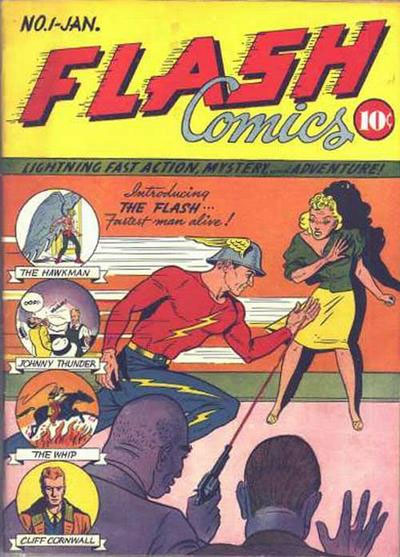 This monumental comic is the 6th copy Action Comics #1 to make our most expensive comics list with a hot selling price of $436 thousand!

This copy of Action Comics #1 will be #7 to make our list!

Even when graded at a 3.0, this incredibly valuable comic managed to bear a pretty hefty price tag. In stark contrast to the 7 other more expensive copies of Action Comics #1, this comic barely hangs onto its status as "a collectible." It has almost no cover gloss, yellowed paper, small pieces missing, and is usually creased. It's very apparent that with this particular comic book, the majority of the price tag is determined by its rarity and desirability rather than its condition. Since everyone wants to get their hands on the comic where Superman first appeared, this 3.0 comic still sold for a super price.

This comic features the well-known Iron Man within its "Near Mint" pages for the very first time. The comic brings to life Tony Stark, weapons scientist and the man behind Iron Man. This copy of Tales of Suspense #39 has set a world record for the highest paid for an Iron Man comic. What's more impressive is this single comic has managed to spark the thrilling Iron Man comics, the Avengers super-team, and their respective movies. 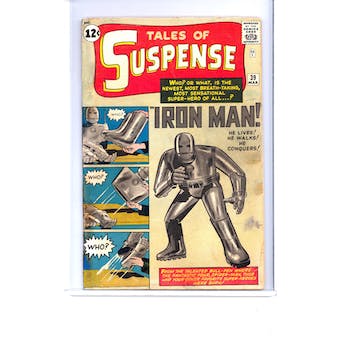 Ironically, the very recognizable "Marvel Comics" was not originally published by Marvel. It was originally sent to print by Timely Comics who later changed their name to Marvel Comics. In addition to debuting the name of a titan in the comic industry, this first issue of the Marvel Comics series introduces the Human Torch who is later seen in the Fantastic Four and the Sub-Mariner. 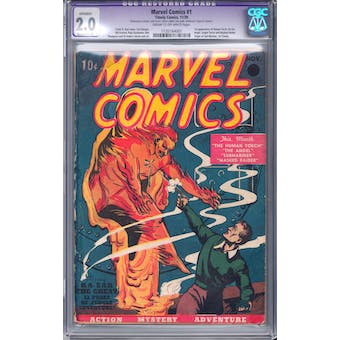 And there you have it! Those 20 comics are more than the average cost of a new build home here in the United States. We've also gotten our hands on the highest ever graded Detective Comics #27 that soon may grace this page. Our copy of Detective Comics #27 was graded as a near mint 9.4 Restored A-3 by CGC, the highest grade and one of only 3 copies ever graded in the 9's. Be sure to check out the high res shots of this iconic issue that's up for sale!