Dave & Adam’s “Leaders of the Pack” from Wild Card weekend

By Dave and Adam's Card World on January 5, 2015 in Sports Card News and New Products

The NFL playoffs kicked off this past weekend with four Wild Card matchups. Let’s take a look at who, besides the refs in the Cowboys/Lions game, made an impact with a postseason edition of Dave & Adam’s “Leaders of the Pack”.

Luck has only been in the NFL for three seasons, but he’s already thrown for over 300 yards in three-straight playoff games. Luck kept his poise during a tight first half against the Bengals, and then took control the game in the second half. His 36-yard TD pass to Donte Moncrief in the third quarter helped to secure the victory for the Colts. Luck now has 1,438 postseason passing yards, which surpassed Kurt Warner’s mark for most yards in a quarterback’s first four playoff games. Now he and Colts will head to Denver for a meeting with Peyton Manning and the Broncos. 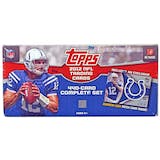 Stewart was the rock for the Panthers’ offense on a rainy night in Charlotte. While the defense was the star of the game for Carolina, it was Stewart that helped the offense control the tempo of play. The wet weather might follow the Panthers into the Divisional round of the playoffs as they will travel to Seattle to face the defending champion Seahawks.

Williams caught both of Tony Romo’s touchdown pass in the hard-fought win over the Detroit Lions. His first came on a third-and-12 play where he found an opening in the Detroit defense and took it to the endzone on a 76-yard play. Romo found Williams in the back of the endzone on third-and-goal play in the fourth quarter for the game winning touchdown. Dallas moves on to play Green Bay next weekend, in the first Cowboys-Packers playoff game since the 1967 NFL (NFC) Championship game (a.k.a. The Ice Bowl).

Dave and Adam's is one of the largest sellers of trading cards and collectibles in the world. Located just outside of Buffalo NY, the company operates two retail stores as well as the e-commerce website www.dacardworld.com
View all posts by Dave and Adam's Card World →
Dave & Adam’s Buying Team is Big Easy bound for New Orleans Comic Con
Press Pass ceasing operations