The US Women’s National Soccer Team reached the pinnacle of their sport for the first time in 16 years when they captured the Women’s World Cup championship on Sunday in Vancouver. The United States soundly defeated Japan 5-2 in the final match to secure the title.

Carli Lloyd became a instant national sports hero during the game as she netted a hat trick to help propel her team to victory.

Collectors eager to obtain cards and autographs featuring Lloyd and other members of the championship team can find them in several products currently on the market.

The best option is 2012 Panini Americana Heroes & Legends, which features a large set devoted to the Women’s National Soccer Team. Many of the players on this year’s championship team were featured in that set, including Lloyd plus Alex Morgan, Abby Wambach, Hope Solo, Christie Rampone, Shannon Boxx, Amy Rodriguez, Becky Sauerbrunn, Sydney Leroux and Heather O’Reilly.

Every player in Americana has a base card plus numbered autograph (#’d to 159), relic (#’d to 199) and auto relic (#’d to 59) cards. There are also dual player cards with autographed versions numbered out of 49 and dual relics numbered to 99.

Dave & Adam’s currently has some great deals on 2012 Americana, but be sure take advantage of them now before the increased demand depletes our inventory. We have several product configurations available, including hobby and retail editions, that should fit every kind of budget and collector. 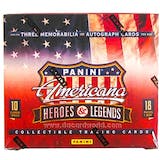 2012 Topps US Olympic Team & Olympic Hopefuls is another great product that features several soccer stars. Solo, Morgan and Wambach each have autographs and relic cards in the set that salutes American Olympians. Carli Lloyd and Kelley O’Hara also have relic cards, including unique patch and pin cards.

Lloyd also appears in 2014 Topps Allen & Ginter Baseball. She has base cards, mini cards and a very limited amount of autographs.

Dave and Adam's is one of the largest sellers of trading cards and collectibles in the world. Located just outside of Buffalo NY, the company operates two retail stores as well as the e-commerce website www.dacardworld.com
View all posts by Dave and Adam's Card World →
2015 Hit Parade Baseball Series 3: Bronx Pinstripe Edition preview
Be a VIP at the National with Dave & Adam’s