By Dave and Adam's Card World on October 22, 2014 in Panini, Sports Card News and New Products

Panini’s Flawless brand has wowed basketball collectors for the past two years, but now it makes it way to the gridiron with 2014 Panini Flawless Football. This high-end, low-numbered set comes with seven autograph, two memorabilia and one jewel-slabbed card per box. Every card in the set is numbered to 25 or less. 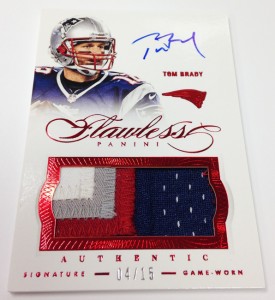 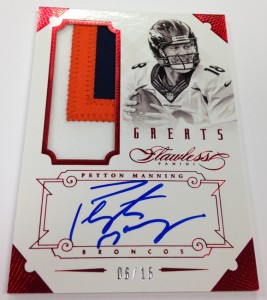 Base Platinum cards come numbered to 20 and have an authentic diamond on the card. Flawless Emerald parallel replace the diamond with a green emerald and are numbered to only five. 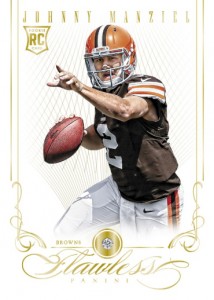 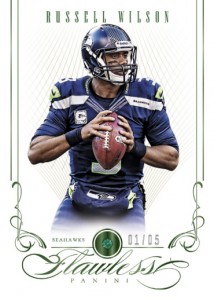 Rookie Autographs showcase the top 20 rookies in the NFL this season with on-card signatures. Rookie auto cards are numbered to 25.  Look for for more first-year player autographs with Rookie Patch Autographs. 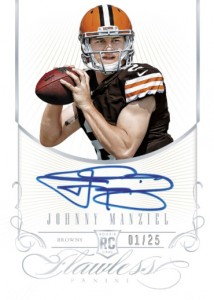 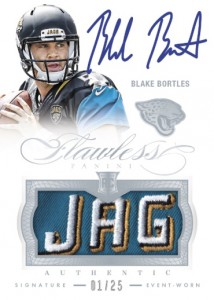 Veteran and retired players are feature with both patch and patch autograph cards. Some of the legendary players of the past included in Flawless include Joe Namath, Bruce Smith and Michael Irvin. 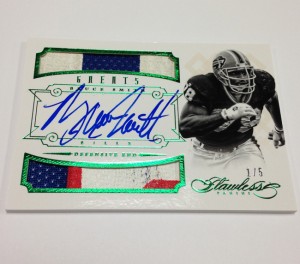 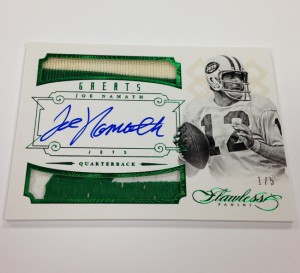 2014 Panini Flawless Football releases on Halloween (October 31), and to celebrate the occasion DACW Live will be breaking Flawless Football cases. There is a two box hobby case break live at 12 noon Eastern followed by a High Roller five-case break. DA Cardworld launched the High Roller case break format with National Treasures basketball and it has been very popular. Every person that buys a slot gets one team, randomly chosen, and they will get the cards for that team from all five cases.

Dave and Adam's is one of the largest sellers of trading cards and collectibles in the world. Located just outside of Buffalo NY, the company operates two retail stores as well as the e-commerce website www.dacardworld.com
View all posts by Dave and Adam's Card World →
Leaf & In The Game announce new promos for hockey prodcuts
2014 Topps Supreme Baseball preview