By Dave and Adam's Card World on October 9, 2014 in Panini, Sports Card News and New Products

Panini brings back the Classics brand this November with 2014 Panini Classics Baseball. The set comes jam-packed with autograph and relic cards featuring both current stars and rookies as well as legendary players from the past. Two autograph ans two memorabilia cards will come per master box with 24 packs total.

Many of the sets containing relic cards have different combinations of memorabilia, including bat and jersey swatches. There are also autographed and regular versions of the relic cards. 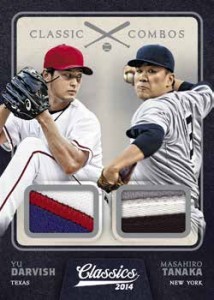 Classic Combos pairs up teammates going back over 100 years (even Ty Cobb and Sam Crawford from 1906!) and features relic swatches from both players. There is one card in the set that doesn’t have a pair teammates and that showcases Japanese pitchers, Masahiro Tanaka and Yu Darvish. All cards in the sets are numbered to 99 or less. 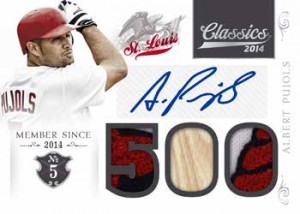 Membership Materials includes die-cut swatches that spell out different abbreviations or numbers. There are five different versions: 500 for the 500 HR club, 300 for the 300-win club, MVP for former MVP winners, ROY for previous Rookies of the Year and HOF for members of the Baseball Hall of Fame. Membership cards are numbered to 25 or less and Prime versions are numbered to 10. 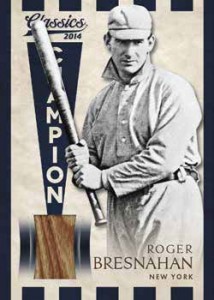 Champion Materials pays tribute to 20 different players to have won championships. Players in the set include Honus Wagner, Lou Gehrig and the first memorabilia cards of Roger Bresnahan and Bob Meusel. All cards are numbered to 99 or less. 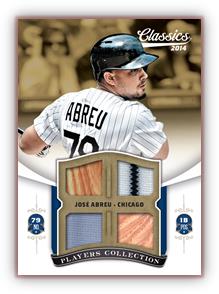 You’ll find quad relic cards with Players Collection. This has 20 subjects from across baseball’s present and past with names like Jose Abreau, Derek Jeter, Stan Musial, Jim Thrope and Nolan Ryan. Each card is numbered to 99 or less. 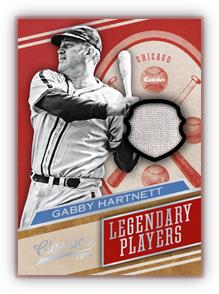 More greats of the game are showcased in Legendary Players including catcher Gabby Hartnett with his first-ever memorabilia card. Other players in the set include Bob Feller, Joe DiMaggio, Roger Maris and Roberto Clemente. 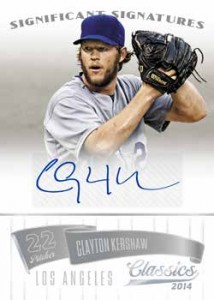 One of the bigger sets is Significant Signatures with a total of 100 subjects. Cards are numbered to 299 or less with a Gold parallel numbered to 25 or less and a one-of-one Platinum Parallel. 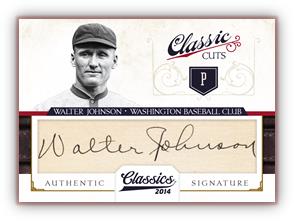 Classic Cuts feature cut autographs of some legendary names. Ted Williams, Harmon Killebrew and Walter Johnson are part of the set, which feature cards numbered to five or less. 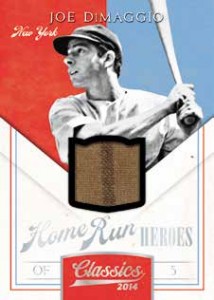 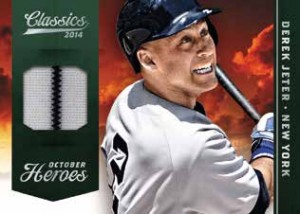 Home Run Heroes highlights some of the great long-ball hitters of the game and October Heroes honors postseason performers. Both sets have combo, auto, bat and prime versions that are numbered to 99 or less.

Dave and Adam's is one of the largest sellers of trading cards and collectibles in the world. Located just outside of Buffalo NY, the company operates two retail stores as well as the e-commerce website www.dacardworld.com
View all posts by Dave and Adam's Card World →
D & A’s paying top dollar for vintage Magic: The Gathering cards
High Grade CGC Comic Purchase at New York Comic Con!