Upper Deck is once again giving collectors and fans the chance to select the image to be used on the Young Guns rookie card for one of the biggest names of the 2015-16 rookie class.

Earlier this year fans selected, via an online vote, the image used for Connor McDavid’s Young Guns card in Series 1 Hockey. Now they will vote on which image will grace the Young Guns card of Buffalo Sabres rookie and second overall selection of the 2015 NHL Draft, Jack Eichel, for 2015-16 Upper Deck Series 2 Hockey.

Fans will also get to choose the image for the Young Guns cards of third overall pick, Noah Hanafin of the Carolina Hurricanes, and Vancouver Canucks prospect Jake Virtanen. In addition to that collectors can also select the picture for the UD Canvas Young Guns cards of Connor McDavid and Red Wings rookie Andreas Athanasiou as well as the “Team Canada Canvas” card of Arizona Coyotes prospect, Max Domi.

You can cast your votes at http://UpperDeckStore.com/YoungGuns from now through midnight on Monday, November 30.

“Allowing fans to be a part of the creative process brings a new element to the cards they already love” said Chris Carlin, Sr. Marketing & Social Media Manager at Upper Deck in a company press release. “These cards are going to be treasured for years to come, so it only makes sense to give collectors a chance to help create them. We are also encouraging fans to use the hashtag #YoungGuns to share their favorite images and comments.” 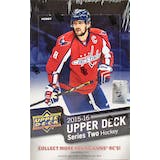 Dave and Adam's is one of the largest sellers of trading cards and collectibles in the world. Located just outside of Buffalo NY, the company operates two retail stores as well as the e-commerce website www.dacardworld.com
View all posts by Dave and Adam's Card World →
2016 Topps Series 2 Baseball preview
Black Friday comes early for Dave & Adam’s