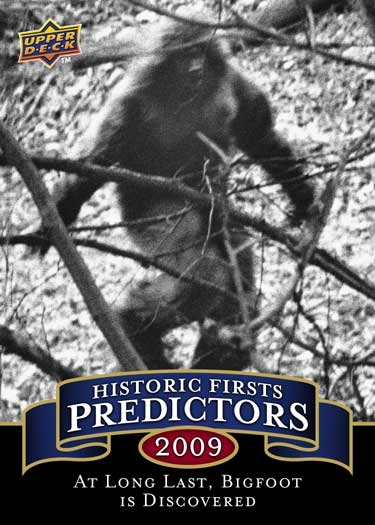 The Upper Deck Company is releasing a special series of nine collectible insert cards entitled “Historical Firsts Predictors.â€ The cards, which feature some very bold predictions by the sports card leader, will be scattered inside its next baseball card release – 2009 Series One Baseball and will no doubt provide fuel for conversation, laughter and actual contemplation by collectors.

Topping the list of historic predictions will be cards predicting that an AIDS vaccine is developed, an alien life form is discovered on another planet and the Dow Jones reaches 15,000 points!

“Nobody could have guessed how 2008 was going to turn out, so we thought we’d have some fun and provide some thought-provoking predictions for 2009,â€ said Kerri Stockholm, Upper Deck’s director of Sports Marketing. “With the onslaught of news stories focused on the troubled economy, Upper Deck wanted to provide some hope and humor for collectors and fans. Who knows? Some of these predictions may very well come true.â€

The “Historical Firsts Predictorsâ€ cards, inserted at a rate of 1:6 packs in Upper Deck’s 2009 Series One Baseball release, will be hitting store shelves on February 3. Other noteworthy predictions in the series include gas prices plummeting to 99 cents per gallon, and the first African-American woman being confirmed as a Supreme Court Justice.

Upper Deck also included a few sports-related predictions. The scenario most likely to come true is probably that the National League – following a 10-year drought – actually wins this year’s MLB All-Star Game, which is being played at St. Louis’s Busch Stadium. The two remaining sports predictions include Chicago being named host city of the 2016 Summer Olympic Games, and college football adopting an actual playoff system to determine the national champion.