By Dave and Adam's Card World on April 17, 2012 in Uncategorized

As a surprise addition to this summer’s highly anticipated Mars Attacks Heritage card series, Topps announces that co-creator Len Brown will be signing a limited number of foil-stamped parallel cards.

“During the course of his remarkable, 40+ years at Topps, Len Brown helped shape hundreds of Topps products, from Ugly Stickers to Garbage Pail Kids and Wacky Packages,” said Ira Friedman, Topps VP of Global Licensing.  “He spearheaded many legendary sets, collaborating with artists the likes of Basil Wolverton, Jack Davis, Norm Saunders and Art Spiegelman, among many others– and in his spare time created the T.H.U.N.D.E.R. Agents comic book with Wally Wood for Tower Comics.  We’re thrilled that Len has agreed to add his signature to our 50th Anniversary card set so that fans can have the chance to own an authentic piece of Mars Attacks history.”

For Mars Attacks Heritage,  Brown will be signing 10 foil-stamped parallel  of each of the 55 cards from the reissued base set, for a total of 550 autographs, randomly inserted into packs.  Each of these parallel cards will also be hand numbered 1 through 10.

“Never would I have imagined that Mars Attacks would be so popular and its fans so passionate fifty years later,” said Brown, the sole surviving creator of Mars Attacks. “I’m delighted to be lending my pen to these cards, and hope fans will enjoy them as much as I enjoyed working on the original series all those years ago.”

In commemoration of the brand’s half-century milestone, Topps is reissuing all 55 original Mars Attacks cards, plus adding 25 all-new ones.  Ten of the new cards feature paintings by Jason Edmiston, inspired by unused Wally Wood sketches from 1962.  The other 15 new cards showcase never-before-seen “New Universeâ€ art by comic artist John McCrea.  All base cards will be produced on vintage style “Heritageâ€ card stock.  In addition, first-ever Mars Attacks sketch cards will be randomly packed at the rate of one per hobby display box.

Mars Attacks Heritage is currently being offered via Topps authorized hobby distributor network and is scheduled to appear in stores this July.

For more information on Mars Attacks, including an ever-growing gallery of sketch cards, go to:  www.facebook.com/MarsAttacks.  Also follow on twitter for news, announcements and more @realmarsattacks 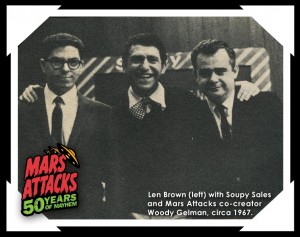