By Dave and Adam's Card World on November 20, 2015 in Uncategorized

The Chicago Cubs’ trio of outstanding rookies that helped lead them to the National League playoffs this season have been named to the 2015 Topps MLB All-Star Rookie Team. 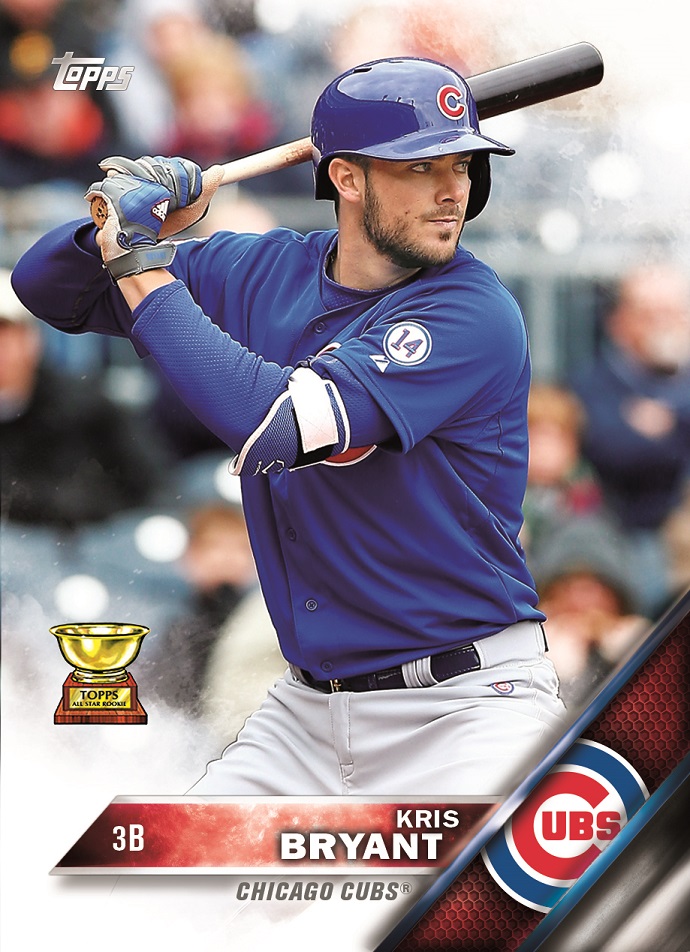 Kris Bryant, Addison Russell and Kyle Schwarber have all been chosen to receive the Topps Rookie Cup on their 2016 Topps Baseball card. Bryant, the 2015 NL Rookie of the Year, has been the most exciting rookie for collectors to chase this season with 26 home runs and 99 RBIs in his first year.

The Cubs led the MLB with three players on the Topps Rookie Team. The New York Mets and Miami Marlins each had two players make the cut. Outfielder Michael Conforto and right-handed pitcher Noah Syndergaard are representing the NL champion Mets, while catcher J.T. Relamuto and first baseman Justin Bour made the squad for Miami.

American League Rookie of the Year, Carlos Correa, was selected as the top rookie shortstop. Just like Bryant, Correa also made the postseason in his rookie year. Correa hit 22 home runs in just 99 games this season and added two more during the playoffs.

For only the second time in 60-year history of the Topps All-Star Rookie Team a designated hitter has been added to the lineup as Twins DH, Miguel Sano, was chosen after hitting 18 home runs in 2015.

Here is the full list of the 2015 Topps MLB All-Star Rookie Team:

Dave and Adam's is one of the largest sellers of trading cards and collectibles in the world. Located just outside of Buffalo NY, the company operates two retail stores as well as the e-commerce website www.dacardworld.com
View all posts by Dave and Adam's Card World →
DACW Live plans special group breaks for Black Friday
Here Jeskai Goes Again – FNM Recap 11/20