In honor of the 60th anniversary of their first football release, Topps has announced an unique buyback program for the 2015 edition of their flagship football product. 2015 Topps Football will feature buybacks of 60 iconic  rookie cards produced by the company during the past 60 years.

Several players, including Joe Namath and Roger Staubach, will have additional buybacks from later in their career as well.

Topps 60th anniversary buybacks will be stamped with the official anniversary logo. As a twist Topps has come up with five levels of parallels for buyback cards that will be indicated by the color of the stamp on the card. The different colors will indicate the rarity of that stamped buyback: Black (Standard), Red (Limited), Blue (Rare), Silver (Scarce) and Gold (1 of 1).

Check out the video from Topps for a complete explanation: 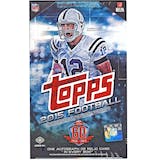 Dave and Adam's is one of the largest sellers of trading cards and collectibles in the world. Located just outside of Buffalo NY, the company operates two retail stores as well as the e-commerce website www.dacardworld.com
View all posts by Dave and Adam's Card World →
2015 Topps Inception Football preview
#DACWPulls: UD Premier Hockey hits