By Dave and Adam's Card World on September 30, 2014 in Uncategorized

When 2015 Press Pass Cup Chase drives on to shelves on October 29 there will still be three races left in the 2014 NASCAR Sprint Cup Series season. Either way the first NASCAR release for 2015 promises some big hits with three autograph and two memorabilia cards in every box.

Press Pass Cup Chase has a large variety of autograph, memorabilia and combination cards. Leading the way is Upper Cuts Auto, which are booklets that have a signature on one half and a jumbo memorabilia swatch on the other. There is one booklet per case. 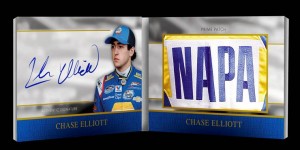 There are two different subsets to find race-used tire pieces: Burning Rubber and BR Letterman Edition. Letterman Edition have a letter from the Goodyear Eagle wordmark that is stamped on the sidewall of every tire.

There are 100 cards in the base set with a limited run of parallels. You’ll find one parallel numbered to 75 or less in every pack.

Dave and Adam's is one of the largest sellers of trading cards and collectibles in the world. Located just outside of Buffalo NY, the company operates two retail stores as well as the e-commerce website www.dacardworld.com
View all posts by Dave and Adam's Card World →
Coming Soon: Dave & Adam’s Upper Deck Cards
2014-15 Upper Deck Artifacts Hockey preview