By Dave and Adam's Card World on October 21, 2014 in Uncategorized

Upper Deck is putting a new spin on its NCAA license agreement with 2014 Upper Deck Conference Greats Football, which releases tomorrow (October 22). This set will entirely focus on the Southeastern Conference (SEC), which has been the dominant conference in college football recently with seven national championships over the last eight years.

All 14 SEC schools will be represented in the set:

Conference Greats features 100 base cards with 86 players and 14 schedules card with one for each school. The base set also has three levels of parallels: Pewter (1 per pack), Cooper (1 in 4 packs), Black (#’d to 10).

There are also four mini sets included with Memorable Moments, Alumni Stars, Base Set Hi Series Stars and Baser Set Hi Series Rookies. There are autograph parallel cards for all four of these sets. Jersey Autograph Parallel are also available and are numbered to 25 or less. You will find one autograph card per box. 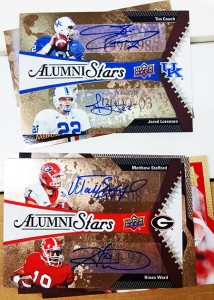 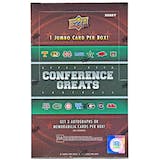 Dave and Adam's is one of the largest sellers of trading cards and collectibles in the world. Located just outside of Buffalo NY, the company operates two retail stores as well as the e-commerce website www.dacardworld.com
View all posts by Dave and Adam's Card World →
Final batch of MacKinnon rookies to be released in 2013-14 The Cup Hockey
#DACWPulls: Triple Threads Baseball live break hits