By Dave and Adam's Card World on November 12, 2014 in Uncategorized

Panini National Treasures Baseball returns for 2014 after no release in 2013. Panini spent the year off building a large collection of memorabilia to pack in this year’s set and significantly increasing the number of hits and autographs from the 2012 set.

National Treasures Baseball comes with eight cards per box with four autographs, one booklet card and three additional cards that either memorabilia cards, autograph cards, or cards embedded with a jewel.

Just like in previous releases star players from the past and present as well as up and coming prospects are featured in National Treasures. Legend Cuts Jumbo Material booklets feature past greats of the game with a cut signature and a jumbo relic swatch. Special nickname and stat versions of the cards are available and are numbered to 25 or less. Panini has acquired memorabilia from Hall of Fame greats, including Ty Cobb, Honus Wagner, Lou Gehrig, Joe DiMaggio, Jackie Robinson, Ted Williams and Roberto Clemente.

Star Silhouettes are relic auto cards numbered to 99 or less. Limited Prime parallels come numbered to 25 or less and there are also one-of-one Laundry Tag and Brand Logos parallels. Flawless Diamonds make their baseball debut with cards embedded with gems and are numbered to 20. There are two levels of parallels: Emeralds (#’d to 20) and Diamond (#’d 1/1). Panini has included Bat Barrels cards for the first time in National Treasures. These span the history of baseball with bat pieces from Rogers Hornsby, Roger Maris, Derek Jeter, Mike Trout and more. Bat Knobs cards have also increased from 25 in 2012 to 75 for this year. Baseball Die-Cut autograph cards feature player signatures on an image of a baseball along with the player’s picture. Baseball Die-Cuts are numbered to 99 or less. Made in the USA patch auto cards incorporate and American flag patch with a player signature. There are also several Latin American players featured in this set with the flag of their home country, including Puerto Rico, Venezula and Cuba. 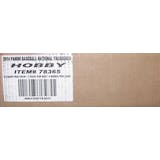 Dave and Adam's is one of the largest sellers of trading cards and collectibles in the world. Located just outside of Buffalo NY, the company operates two retail stores as well as the e-commerce website www.dacardworld.com
View all posts by Dave and Adam's Card World →
Dave & Adam’s made record-breaking number of buys at Toronto Expo
2014 Panini Absolute Football preview