Bowman Draft Baseball has some brand spanking new features for 2015. They have crafted some new autographs and inserts for one top products for prospect and rookie collectors. Boxes of 2015 Bowman Draft will come with one autograph. Leading the wave of new content are Team of Tomorrow Die-Cut inserts. These pair a 2015 draftee with an existing top prospect from the same MLB franchise. On top of the base version there are four levels of numbered parallels: Gold, Orange (#’d to 25, hobby only), Red (#’d to 5) and SuperFractor (#’d 1/1). Draft Dividends showcase players that were drafted out of high school, but chose to take the college route. The card highlights the dramatic improvement in draft position the player gained after honing their skills on the collegiate level. These will have signed versions that are numbered, including two levels of parallels: Orange (#’d to 25) and Red (#’d to 5). Prime Pairings are similar to Team of Tomorrow as they pair a draft pick with a current prospect from the same organization. These are signed by both players. Red Refractor parallels are numbered to five.

Draft Night insets use images taken at the MLB Draft of the players selected. These have Orange (#’d to 25) and Red (#’d to 5) parallels.

The only memorabilia cards in Bowman Draft are 2015 SiriusXM All-Star Futures Game Relics. These feature jersey relics of the Futures Game uniforms. Hobby boxes will have special Orange parallels numbered to 25. 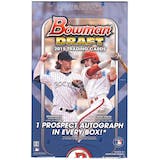 Dave and Adam's is one of the largest sellers of trading cards and collectibles in the world. Located just outside of Buffalo NY, the company operates two retail stores as well as the e-commerce website www.dacardworld.com
View all posts by Dave and Adam's Card World →
Origins Game Fair & Special Edition NYC on tap for Dave & Adam’s this weekend
Topps adds 2015 NBA draft prospects autos to Allen & Ginter