Picking the 2014 NASCAR Chase for the Sprint Cup

The postseason for the NASCAR Sprint Cup Series is under way. There is a lot of excitement surrounding the new Chase format for this year with and expanded field of 16 drivers and three rounds of eliminations setting up a final four-car showdown for the championship at Homestead-Miami. I know this piece comes about a week late since the Chase for the Sprint Cup began last weekend at Chicago, but my picks for the final four remain unchanged.

Here are my four picks that will be racing for the Sprint Cup title at Homestead this November.

1. Brad Keselowski – Penske Racing: Keselowski looks poised to win his second title in three seasons with a series-leading five wins so far this year. He’s won the last two races including the regular season finale at Richmond and the Chase opening race at Chicagoland last weekend. It’s been a big turn around for Keselowski after a disappointing 2013 season when he failed to make the Chase and was unable to defend his championship from the year prior. Both he and his Penske racing teammate, Joey Logano, have become the leaders of the Ford contingent in the Cup garage with strong qualifying performances and consistent finishes up front.

If you are searching for Keselowski rookie cards there are actually two kinds to collect. You’ll find his first cards in 2008 as a Nationwide Series driver with JR Motorsports (Dale Earnhardt Jr.’s team). His Cup rookie cards (designated CRC in some guides) came the following year in 2009 while driving the #09 car for James Finch.

2. Jimmie Johnson – Hendrick Motorsports: How can you not include the six-time champion as a contender? Some experts believe there are chinks in the armor of the 48 team but I feel like they’re just warming up to make a run for a historic seventh title. Johnson slumped his way through July & early August but has not finished worse than 12th in the last five races. He and crew chief, Chad Knaus, are the best when in comes to strategizing for the Chase. They will be in the hunt at Homestead with a chance to join the immortal ranks of Richard Petty and Dale Earnhardt.

If When Johnson wins a seventh championship the value of his collectables will continue to go higher. His first cards came in 2000 when he made his debut in the Nationwide (then Busch) Series. Look for his Cup rookies in 2002 sets. 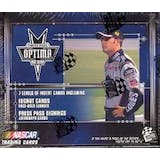 3. Jeff Gordon – Hendrick Motorsports: At 43 years of age Jeff Gordon is becoming one of the elder statesman of the Cup Series. It’s hard to believe it’s been 20 years since he burst on to the scene with that funny moustache. Ninety-one wins and four championships later it could be easy for Gordon to hang up his helmet and call it a career, but he isn’t ready to slow down. Gordon has been back in championship form this year with three wins and hasn’t ranked worse than fifth in the points all season. He has watched his protégé, Jimmie Johnson, win six titles in the years since Gordon won his last (2001). This could be the year the #24 gets its fifth championship.

With over 20 years in NASCAR, there are plenty of Jeff Gordon cards to collect. His cards usually have the highest values out of any other driver in the sport. While his legend in the sport is already cemented, a fifth championship can only help the value of his collectables.

4. Kevin Harvick – Stewart-Haas Racing: Harvick is the only driver out of this bunch that is looking for a first career Sprint Cup title. He has been kind of cruising along this season after winning two races early in the year, which locked him into the Chase. Harvick and crew chief, Rodney Childers, have meshed well in their first season together and have been able to find plenty of speed. Luck has not always been on his side this year with some mechanical problems and poor pit stops holding back his results. Right before the chase SHR swapped Harvick’s pit crew with the one that serviced Tony Stewart’s car this year in the hopes of fixing that issue.

Harvick has been in the top series of NASCAR for over 15 years. His first rookie cards came in 1999 as a driver in the Truck Series. Look for his first cards as a Cup driver in 2001 sets when he was called upon to take over for Dale Earnhardt following his tragic death at Daytona. A first championship would certainly cause his value to spike among collectors. 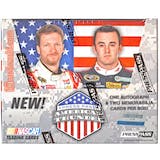 Dave and Adam's is one of the largest sellers of trading cards and collectibles in the world. Located just outside of Buffalo NY, the company operates two retail stores as well as the e-commerce website www.dacardworld.com
View all posts by Dave and Adam's Card World →
2014 Topps Prime Football preview
Topps Announces “Fire Friday” Contest