By Dave and Adam's Card World on January 7, 2016 in Sports Blogs

Two of Major League Baseball’s biggest stars from the 1990s and early 2000s, Ken Griffey, Jr. and Mike Piazza, were elected to the Baseball Hall of Fame on Wednesday.

Both players left their mark on the game and on the hobby during their tenure. Griffey, who was nearly an unanimous selection with his name on 437 of 440 ballots, was one of the most collected players of his era. His 1989 Upper Deck rookie card is one of the most iconic sports cards of all time. The image of this card was all over the place on Wednesday as we awaited the results of the Halls’ voting. ESPN’s Darren Rovell, who on Wednesday Periscoped himself opening packs of 1989 Upper Deck Baseball, recently wrote how Griffey was selected to be the #1 card of the first Upper Deck baseball set.

While Griffey’s rookie card is a must have for many collectors, it’s value doesn’t equal it’s popularity. That is mainly due to the fact there are plenty of Griffey rookies to be found. It is speculated that more than 2 million copies of the card were printed by Upper Deck. Even graded copies are in surplus as it is one of most graded cards in history with over 100,000 copies looked at by the major grading firms.

Despite it’s availability the card is still one that is loved by a generation of collectors that grew up just as the industry started boom (and eventually bust). These collectors are now in their 20s & 30s and many are reentering the hobby, including starting collections for their children.

With Griffey going to Cooperstown it means his legacy and value within the hobby will continue to grow. 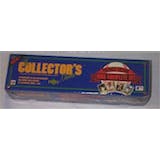 Dave and Adam's is one of the largest sellers of trading cards and collectibles in the world. Located just outside of Buffalo NY, the company operates two retail stores as well as the e-commerce website www.dacardworld.com
View all posts by Dave and Adam's Card World →
What’s Up in The Lounge – January 6
2016 Leaf Greatest Hits Baseball preview