Derek Jeter Ready to Call it a Career

By Dave and Adam's Card World on September 25, 2014 in Sports Blogs

Derek Jeter will finally say goodbye to Major League Baseball this weekend after 20 seasons in Yankee pinstripes. Jeter has one final series at Fenway Park against the Red Sox before closing out his illustrious career.

If you’re looking to get in on the “Jeter-mania” then Dave & Adam’s is the right place for you. We feature an assortment of Jeter cards and memorabilia as well as unopened boxes of baseball cards to help you complete your collection of the Yankee captain.

The quintessential Derek Jeter rookie card is #279 1993 Upper Deck SP Baseball. There were several Jeter rookie cards printed in ‘93 but this is the one most coveted by collectors. This was also UD’s first ever SP set, which adds to the value of this Jeter rookie. 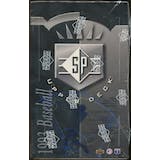 Dave & Adam’s also has a collection of Derek Jeter collectables, including autographed pictures, jerseys, balls, bats, gloves and batting helmets. We also have a seat back from the original Yankee Stadium signed by the 14-time All-Star. All of these items are authenticated.

Dave and Adam's is one of the largest sellers of trading cards and collectibles in the world. Located just outside of Buffalo NY, the company operates two retail stores as well as the e-commerce website www.dacardworld.com
View all posts by Dave and Adam's Card World →
2014 Panini Prizm Football preview
Dave & Adam’s Celebrates National Comic Book Day