The NFL season is rounding the three-quarter pole and is headed for a fantastic finish. Week 12 may be remembered for one specific catch but there were some other memorable performances that earned the distinction of being Dave & Adam’s “Leaders of the Pack”.

Tony Romo and the Dallas Cowboys managed to upstage the amazing catch by Odell Beckham, Jr. with a second half come back to upend the Giants 31-28 on Sunday night. Romo’s 275 yards and four touchdowns combined with the come from behind performance earned him our “Leader of the Pack” honors at quarterback for Week 12. He led the Cowboys on a 80-drive in the closing minutes of the fourth quarter that was punctuated with a touchdown pass to Dez Bryant to take the lead for good. Romo was a perfect 6-for-6 on that drive for 66 yards, including the 13-yard touchdown strike to Bryant.

Romo and the Cowboys are now 8-3 and are tied with the Eagles for first place in the NFC East. This sets up a Thanksgiving matchup with Philadelphia that is stuffed to the giblets with playoff and divisional implications. Be sure to check out our inventory of Tony Romo cards and collectibles or purchase select boxes of 2003 football to find a rookie card. 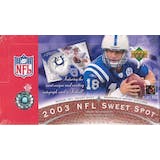 The aforementioned Philadelphia Eagles got back on the winning track on Sunday following last week’s beatdown by the Packers. The Eagles took down the Tennessee Titans 43-24 to keep pace with the Cowboys. Philadelphia was led by our “Leader of the Pack” at running back for Week 12, LeSean McCoy, who racked up 130 yards and a touchdown.

McCoy ranks third in the NFL  in rushing yards this season with 859. He won’t equal the 1,607 yards that he piled up last season to lead the league, but he is well on his way to his fourth season of over 1,000 yards. In honor of his second LOTP award of the season we will revisit some of the McCoy rookie cards and memorabilia that is available at Dave & Adam’s.

As for our “Leader of the Pack” at wide receiver, there was little doubt about who to pick…

Odell Beckham, Jr.’s unbelievable one-handed grab was the cherry on top of another impressive performance for the rookie from LSU. Beckham is single-handedly (get it?) taking over the Giants offense with over 100 yards receiving in three of his last four games (he had 93 yards in the other). Despite the loss Beckham finished last night’s game against Dallas with ten catches for 146 yards and two touchdowns, including that ridiculous grab.

Beckham’s rookie cards have been gaining popularity since he made his debut in Week 5. There is a wide selection of rookie auto and auto jersey cards available in 2014 football products. One card to look for is a short-printed variation in Panini Rookies and Stars that shows Beckham making a one-handed catch. 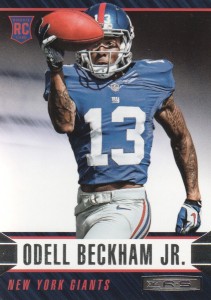 Dave and Adam's is one of the largest sellers of trading cards and collectibles in the world. Located just outside of Buffalo NY, the company operates two retail stores as well as the e-commerce website www.dacardworld.com
View all posts by Dave and Adam's Card World →
Back to work blog
Upper Deck locks up Notre Dame rights