By Dave and Adam's Card World on February 2, 2015 in Sports Blogs

Super Bowl 49 will go down as one of the most memorable Super Bowls in history thanks to the Patriots’ fourth quarter comeback plus the game-saving, goal line interception in the final seconds.

With the NFL season now complete, it is time for the final edition of Dave & Adam’s “Leaders of the Pack”. Instead of our traditional awards for quarterback, running back and wide receiver, we have chosen three players that had stand out performances in the big game.

For the first time in ten years Brady is back on top of the football world after his MVP performance. He led the Patriots back from a 10-point deficit in the fourth quarter to win his fourth Super Bowl and tie Terry Bradshaw and Joe Montana for most wins in the big game. His four touchdowns also moved him ahead of Montana for most career touchdown passes in Super Bowl history. The record was broken on the touchdown pass to Danny Amendola to make the score 24-21.

With his masterful play on Sunday night, Brady further cemented himself as one of the game’s all-time greats.

The rookie free agent from Division-II West Alabama will never have pay for a drink again in Boston after sealing the Pats Super Bowl win with his interception of Russell Wilson. Plenty of Monday morning quarterbacks questioned Pete Carroll’s decision to throw the ball on second and goal from the one yard line after Butler stepped in front of Ricardo Lockette to make the pick.

Butler was actually involved in the two most memorable plays of the game. He was also covering Jermaine Kearse on the play where Kearse caught the ball while on his back.

Collectors will have to wait until next season to find a Malcolm Butler rookie cards as he did not a card produced in 2014.

Speaking of players that were unheard of until yesterday, Chris Matthews went from being a former Foot Locker employee to almost a Super Bowl MVP during the game. Matthews’s four catches during Super Bowl 49 were the first four catches of his NFL career. He caught a touchdown pass in the final seconds of the first half to tie the game 14-14, which helped to wake up the Seahawks offense. It was a pretty impressive performance from a former Arena league and CFL player that also spent time on the Seahawks practice squad this year.

Seattle is Matthews’s second NFL team. He started his career as an undrafted free agent with the Cleveland Browns, but was cut during the 2011 preseason. His stay in Cleveland was long enough to get a football card in 2011 Panini Gridiron Gear. 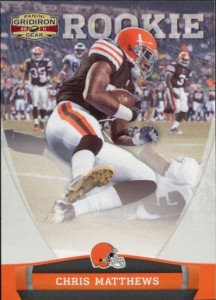 Before the Super Bowl was over collectors were scouring through boxes to see if they had this card lying around. It has sold online from anywhere between $10 and $60. Coincidentally someone sold one of these Matthews rookie cards on eBay for just $1.40 on January 23. Dave & Adam’s has hobby boxes of 2011 Panini Gridiron plus some great deals on retail pack lots, if you are looking to find the cardboard debut of this Super Bowl standout.

Matthews also had a card produced during his time with the Winnipeg Blue Bombers in the CFL.

Dave and Adam's is one of the largest sellers of trading cards and collectibles in the world. Located just outside of Buffalo NY, the company operates two retail stores as well as the e-commerce website www.dacardworld.com
View all posts by Dave and Adam's Card World →
Stan Lee Autographed Photo Winner from Wizard World Portland
Harrison Ford & Mark Hamill sign for Topps Star Wars Masterwork