Dave & Adam’s “Leaders of the Pack” Divisional Playoff round

So far in the 2014-15 NFL Playoffs we could do a “Failures of the Pack” post on players/things that kept teams from advancing. This past weekend was no exemption with Peyton’s injury and that call on the Dez Bryant non-touchdown affecting the outcome of games. We’ll keep this positive instead, so here’s three players that helped their teams get one step closer to the Super Bowl.

Brady and the Patriots battled back from two 14-point deficits to beat the Ravens 35-31 on Saturday. It was the first time in NFL history that any team has done that in the postseason. Adding to the historical importance of the game was the fact that Brady surpassed Joe Montana for the most touchdown pass in NFL playoff history with 46. He could’ve had a 47th but instead it was Julian Edelman who threw a 51-yard TD pass to Julian Edelman to tie the game 28-28 late in third quarter. The Patriots play the Colts for the AFC Championship.

Herron did not put up big numbers but he still was a big part of the Colts’ offense on Sunday in the win over Denver. On top leading the rushing attack for Indy, Herron also caught more passes than any other receiver as a check down option for Andrew Luck. His lone touchdown came early in the second quarter to tie the game 7-7. Herron was a sixth round pick back in 2012 by Cincinnati and now he has climbed to the top of the Colts’ depth chart at running back. Indy even listed Trent Richardson as inactive for Sunday’s game. You can find his rookie card in 2012 football products.

Adams led all Packers’ receivers on Sunday even with a hobbled Aaron Rodgers throwing the ball. He turned a short pass from Rodgers into a 46-yard touchdown play late in the third quarter that got Green Bay within a point of Dallas. Adams’s seven catches tied his career best performance. He had a decent rookie season after being drafted in the second round from Fresno State. Adams finished the regular season with 446 yards and three touchdowns. 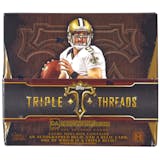 Dave and Adam's is one of the largest sellers of trading cards and collectibles in the world. Located just outside of Buffalo NY, the company operates two retail stores as well as the e-commerce website www.dacardworld.com
View all posts by Dave and Adam's Card World →
DA Card World’s Adam Martin unveils Products of the Year awards on ESPN Mint Condition
2014-15 Panini Select Basketball preview