By Dave and Adam's Card World on October 5, 2015 in Sports Blogs

When you take a look at some of the statistical leaders from Week 4 of the 2015 NFL season, many of the names at or near the top of the charts were on the losing end of their respective game. Well, we only deal with winners for our Dave & Adam’s “Leaders of The Pack”, so let’s take a look at some top performers that help their teams earn a “W”.

Drew Brees made some history as helped lead the Saints to the first win of 2015. Brees’s game-winning 80-yard touchdown pass to C.J. Spiller in overtime was the 400th of his NFL career. He is the fifth QB to accomplish that feat, but he did it in 205 fewer games than anyone else before him. It was nice bounce back for Brees after he missed the previous game with a shoulder injury. The Saints beat the Cowboys in overtime 26-20 in a back-and-forth affair to the goose egg out of the win column in the standings.

We have a selection of Drew Brees rookie cards in stock from the 2001 season before he threw those 400 touchdowns. The former Purdue Boilermaker has become one of the greatest NFL quarterbacks of his era since his debut with the Chargers 14 years ago.

Instead of just one repeat winner, we have two in the running back category. Freeman backed up last week’s huge game with three touchdowns in the Falcons’ 48-21 win over the Houston Texans. He has six touchdowns in his two games filling in for the injured Tevin Coleman. Freeman takes “Leader of The Pack” honors in back-to-back weeks. The Falcons improved to 4-0 with the win.

Ivory racked up a career-high 166 yards in the Jets 27-14 win over the Miami Dolphins in a game played at Wembley Stadium in London, England. He bruised the Dolphis defense with an average of 5.7 yards per carry. Ivory is averaging nearly 105 yards per game in the first four weeks of the season, which is tops in the NFL.

Austin and the Rams upended the Arizona Cardinals 24-22 for Arizona’s first loss of the season. Rams QB Nick Foles connected with Austin on a pair of 12-yard touchdown passes to help secure the victory. Austin was only one of two players to catch more than one touchdown pass in the NFL on Sunday with the other being Ted Ginn, Jr. of Carolina. The Rams improve to 2-2 on the season with wins over division foes Seattle and Arizona.

Austin was the eighth overall selection in the 2013 NFL Draft out of West Virginia. He has yet to have his break out season in the NFL, and that could be difficult again this year as part of a Rams offense filled with potentially explosive players. You can find Austin’s rookie cards in 2013 football products. 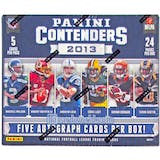 Dave and Adam's is one of the largest sellers of trading cards and collectibles in the world. Located just outside of Buffalo NY, the company operates two retail stores as well as the e-commerce website www.dacardworld.com
View all posts by Dave and Adam's Card World →
2015 Panini Contenders Draft Picks Basketball preview
2015-16 Panini Prizm Basketball preview