We hope every enjoyed the holiday weekend and spent some time with family while watching plenty of football. Let’s take a look at the Dave & Adam’s “Leaders of The Pack” for the penultimate week of the NFL season.

You like that? Cousins four touchdowns passes and a season-high 365 yards helped the Redskins clinch their first NFC East championship in three years. A three-game win streak combined with the fact that Washington plays in one of the worst divisions in the NFL have allowed the Skins to ascend to the top of the standings after starting the season 4-6. Cousins threw 15 touchdowns and ten interceptions during those first ten games, since then he has thrown 11 TDs (including back-to-back 4 TD games) and just one pick. It looks like Washington’s backup plan for Robert Griffin III has certainly paid off.

Remember Tim Hightower? Hightower has emerged from the depths of football obscurity to become the Saints starting running back. He had his best game in more than five years as New Orleans demolished Jacksonville 38-27. Quite the remarkable comeback story for the 29-year-old that, before this season, had not played in the league since 2012.

Jones’s 70-yard touchdown catch in the third quarter helped put an end to the Carolina Panthers’ perfect season. He has already smashed his own team record this season with 1,722 yards with one game left to play. Jones also leads the NFL in receptions and yards despite the Falcons imploding after starting the year 5-0. 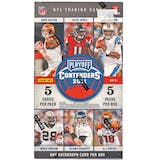 Dave and Adam's is one of the largest sellers of trading cards and collectibles in the world. Located just outside of Buffalo NY, the company operates two retail stores as well as the e-commerce website www.dacardworld.com
View all posts by Dave and Adam's Card World →
2015 Leaf Sportkings preview
Happy birthday, Stan Lee!