This has been an NFL season filled with unpredictable outcomes, and we added a few more to that list during Week 11 on Sunday with surprise wins by the Lions, Colts, Texans and Buccaneers.

Let’s find out if there any surprises in our Dave & Adam’s “Leaders of The Pack” for Week 11.

Both former first overall draft picks threw five touchdowns to five different receivers in their respective Week 11 victories. Newton led the Panthers to their tenth win in a row as they bowled over the Redskins 44-16. The teams both scored twice in the opening quarter to make it 14-14 after 15 minutes, but then Carolina scored 30-straight points to take control of the game. Newton has thrown a touchdown pass in every game this season for Carolina.

Winston tied a rookie record with his five TD passes in Tampa Bay’s 45-17 stomping of the Eagles. He achieved the highest QB rating of his rookie season with a 131.6. Winston has either a passing or rushing TD in all ten of his NFL starts. The win marks the first time in two years that the Bucs have won back-to-back games. They are also winners of three of their last four games and are just a game out of the final NFC Wild Card spot.

While Jameis Winston was picking apart the Eagles defense through the air, Martin was doing it on the ground. He piled up his fourth rushing performance of 100 yards or more this season, and rushed for at least 235 yards for the second time in his career. He joins Corey Dillon and O.J. Simpson as the only players to do that since the 1970 merger. Martin has returned with a vengeance this season after battling injuries. He ranks second in the NFL in total yards and leads the league in rushes of 20 or more yards.

Hopkins caught a pair of TD passes from backup quarterback T.J. Yates in the Texans 24-17 win over the Jets. The second of those TD catches proved to be the difference in the game as the 20-yard reception late in the third quarter game Houston a 24-10 lead. It was Hopkins’s third multi-TD game of the season, and his nine total touchdowns is a new career best. He ranks third in the NFL in receiving yards this season with 1,045.

This is the second LOTP award for Hopkins this season. Look for his rookie cards in 2013 football products. 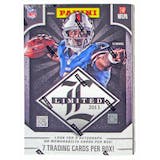 Dave and Adam's is one of the largest sellers of trading cards and collectibles in the world. Located just outside of Buffalo NY, the company operates two retail stores as well as the e-commerce website www.dacardworld.com
View all posts by Dave and Adam's Card World →
Dave & Adam’s remembers Mike Berkus
2015 Panini Luxe Football preview