Week 10 might have been the craziest week of the year so far in the 2015 NFL season. We had unbelievable finishes in Green Bay, Tampa and Baltimore, the Bears and Redskins had surprising dominant wins over conference opponents, Kansas City handed an injured Peyton Manning and the Broncos their second loss of the season and the Patriots and Panthers remain perfect. Let’s see who rose above the craziness to take home this week’s Dave & Adam’s “Leaders of The Pack” honors.

Cousins had the best game of his NFL career as he picked apart the beleaguered Saints defense for four TDs during the 47-14 beat-down of New Orleans. The effort was about as perfect a day as any NFL quarterback could have as he racked up a perfect passer rating of 158.3 To top it all of, Cousins was able to give the game ball to his father who had just completed his final round of cancer treatments. The 4-5 Redskins are very much alive in the race for the NFC East division lead. They are just a half game behind the first place New York Giants.

Cousins was part of the 2012 rookie quarterback class that includes Andrew Luck, Russell Wilson, Nick Foles and his Redskins teammate, Robert Griffin III. Look for his rookie card in 2012 football products or check our selection of Cousins rookies. 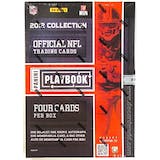 Big Ben wasn’t scheduled to play for the Steelers on Sunday, but an early injury Landry Jones forced the less-than-100% Roethlisberger into action. Roethlisberger battled through a sprained left foot to torch the Browns yet again as he continued his undefeated streak at home against Cleveland. It helps that he has a remarkable receiving tandem of Antonio Brown and Martavis Bryant to throw to, which caught all three of Roethlisberger’s touchdown passes. The Steelers improved to 6-4 and are in possession of the top Wild Card seed in the AFC.

The NFL’s leading rusher steamrolled the Raiders for the sixth 200-yard game of his career. That ties O.J. Simpson for the most 200-yard games in his NFL history. Peterson has returned to familiar form in 2015 after off-the-field legal issues forced him to miss most of last season. He has rushed for over 100 yards in his last four games, and has helped the Vikings surge into first place in the NFC North.

Dave & Adam’s has an extensive inventory of Peterson rookie cards and autographed memorabilia. Included in our collection are several high-graded rookie cards.

Quarterback injuries could not slow down Pittsburgh’s dynamic duo of wide receivers. Bryant and Brown combined for 16 of the 25 completions thrown by Steeler QBs and were targeted on 24 of 37 pass attempts. They were also on the receiving end of all three touchdown passes thrown by Ben Roethlisberger in the 30-9 win over Cleveland. Brown continues to lead the NFL in receiving yards and both players are in the top ten for receiving yards per game.

Dave and Adam's is one of the largest sellers of trading cards and collectibles in the world. Located just outside of Buffalo NY, the company operates two retail stores as well as the e-commerce website www.dacardworld.com
View all posts by Dave and Adam's Card World →
Everything Old Is New Again – 11/13 FNM Recap
2015-16 Hit Parade Series 1 Hockey: 20 Card Rookie Edition preview