By Dave and Adam's Card World on September 21, 2015 in Sports Blogs

Last Sunday wasn’t just a glorious dream, the NFL season did return and it was awesome. Week 2 was even better as we saw huge performances from some big name players. Let’s take a look at who were the Dave & Adam’s “Leaders of the Pack” for Week 2 of the 2015 season.

This was, *cough*, deflating for us here in Buffalo, but it was another phenomenal performance by Brady against the Bills. Brady picked up apart the vaunted Bills defense and silenced a raucous crowd with three touchdown strikes. It didn’t hurt that the Bills defense shot themselves in the foot with some terrible penalties during the game either.

AP’s first game in Minnesota in over 19 months was a memorable one as he helped the Vikings to a 26-16 win over the Lions. It was also his first 100-yard rushing game since his last game at home, which was on December 1, 2013. Despite two fumbles, Peterson improved greatly on his Week 1 performance that saw him rush for only 35 yards.

Dave & Adam’s has plenty to offer fans of Peterson or the Vikings. Check out our selection of Peterson cards, Fatheads and autographed photos.

There were a lot of options for our Leader of the Pack at wide receiver for week two. Allen Robinson, Odell Beckham, Jr. and Larry Fitzgerald were just some of the guys that had huge games for their respective teams. A total of 15 wideouts netted over 100 yards on Sunday. But, our choice was Brown as he and Ben Roethlisberger torched San Francisco’s defense in the Steelers’ 43-18 win. His 195 yards was one yard shy of tying his career best in a single game. Even without Le’Veon Bell and Martavias Bryant, Pittsburgh made it look easy as they ran out to a 29-3 first half lead.

Now in his sixth season, Brown has become one of the top wideouts in the NFL. Pretty good for a guy drafted in the sixth round from Central Michigan. You can find Brown’s rookie cards in 2010 football products. 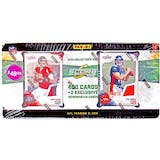 Dave and Adam's is one of the largest sellers of trading cards and collectibles in the world. Located just outside of Buffalo NY, the company operates two retail stores as well as the e-commerce website www.dacardworld.com
View all posts by Dave and Adam's Card World →
Upper Deck announces checklist for 2014-15 The Cup Hockey
2015 Panini Prizm Football preview