Collecting the stars of Super Bowl 49

We’ve known for a few weeks that the quarterback matchup for Super Bowl 49 was going to be a great one based on the four teams that made it to the conference champions.  You could replace Tom Brady with Andrew Luck or Russell Wilson with Aaron Rodgers and you still would have a meeting with two of the league’s elite signal callers. You also have a pairing of QBs that are very popular with collectors that command premium dollars on the secondary market. 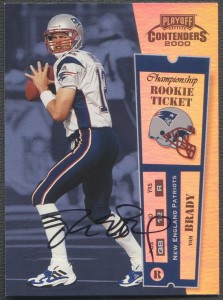 Win or lose on Sunday, Brady’s status as one of the all-time greats will remain solidified and his cards will continue to hold value. When he takes the field in Arizona he will become the second player (first QB) to appear in six Super Bowls, joining offensive lineman Mike Lodish, who played in four Super Bowls with the Bills and then two with the Broncos. A Patriots win would put Brady in elite company as he would join Terry Bradshaw and Joe Montana as the only QBs to win the big game four times.

The holy grail of Brady cards is the 2000 Playoff Contenders Championship Rookie Ticket auto. Dave & Adam’s has sold two of these cards in the past month and a half for over $3,000 each. The second most popular might be his card from 2000 Upper Deck SP Authentic, which were numbered sequentially to 1250. High graded versions of almost any of his rookie cards can easily sell for over $1,000 in the secondary market.

Dave & Adam’s does not currently have any Brady rookies in stock but we do have limited quantities of some 2000 football boxes where you might be able to find one. It is important to remember that since Brady was a sixth round pick that he did not make it into every set that year. 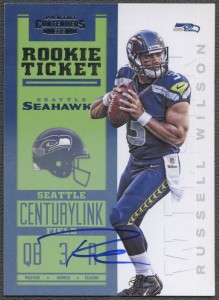 Russell Wilson is also making history of his own while leading his team back to the Super Bowl. Wilson has now reached this level in two of his first three years in the NFL, which has never been done before. A win on Sunday would make him the 12th quarterback to win multiple Super Bowls.

If Wilson hoists the Lombardi trophy for a second-straight year (and beat Peyton Manning and Tom Brady to do it) then it could send values of his cards soaring. Recent sales of Wilson rookie cards in the secondary market have been starting to climb into the four digit category. Just like Brady, the card of choice is the Contenders Rookie Ticket Auto. Dave & Adam’s has sold two of these 2012 Panini cards for over $300 in recent months. One thing Wilson has over Brady when it comes to collecting, is the availability of rookie patch autos. RPAs of Wilson from 2012 Panini National Treasures Football especially rank high on the list of collectors.

If you’re looking to obtain a Wilson rookie, then Dave & Adam’s can help you. We have rookie cards available as well as a selection of unopened boxes from 2012, including special five-pack boxes of Panini Contenders Football that come with one autograph per box. Next week DACW Live will be breaking a case of 2012 Panini Playbook to find some Wilson and Andrew Luck rookies. 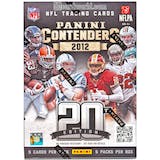 Two other players to keep an eye on are Patriots tight end, Rob Gronkowski, and Seahawks running back, Marshawn Lynch.

Gronk is in search of his first Super Bowl win in his second appearance in the big game. He caught two passes in the Pats’ Super Bowl 46 loss to the Giants. Some of his rookie cards from 2010 are starting to climb above the $100 mark on a consistent basis in the secondary market. His Playoff Contenders Rookie Ticket Auto and RPAs from National Treasures, Topps Supreme and other sets can fetch above $200-300.

This is the second-straight Super Bowl appearance for Lynch. While he isn’t winning any popularity contests with the media this week in Arizona, he is popular  with collectors. Lynch’s rookie season was in 2007 when he was drafted by the Buffalo Bills. Some of his rookies that are popular are rookie patch autos from Upper Deck Exquisite and Panini National Treasures. There is also a dual auto card from 2007 Topps Rookie Premiere that paired him with Adrian Peterson.

Gronkowski and Lynch battled in match of video game skills on Conan O’ Brien’s show that may go down as the most memorable moment during the lead up to Super Bowl 49.

Dave and Adam's is one of the largest sellers of trading cards and collectibles in the world. Located just outside of Buffalo NY, the company operates two retail stores as well as the e-commerce website www.dacardworld.com
View all posts by Dave and Adam's Card World →
#DACWPulls: Classic Signatures Bounty
Stan Lee Autographed Photo Winner from Wizard World Portland