By Dave and Adam's Card World on October 8, 2015 in Sports Blogs

Jake Arrieta pitched a huge game last night for the Chicago Cubs as he led Chicago to their first postseason win in 12 years in the NL Wild Card game. Arrieta threw a complete game shutout with 11 strikeouts and only four hits.

The Cubs have been sweethearts of the hobby for the past few years with prospects like Jorge Soler, Kris Bryant, and Kyle Schwarber. Arrieta broke into the majors a few years before this crop of prospects, but there are some early cards of his that you can get your hands on. 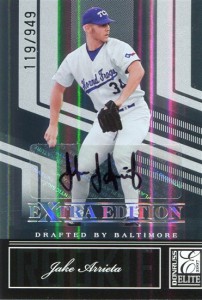 One of Arrieta’s first prospect cards appeared in 2007 Donruss Elite. He was drafted by the Baltimore Orioles that year from TCU, and finished the year playing in a Fall league in Arizona. His first autograph cards appear in this set. 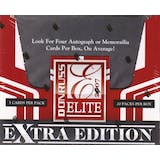 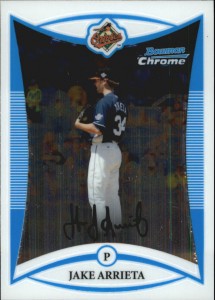 Arrieta also appeared in 2008 Bowman Chrome as an Orioles prospect. There are several Refractor parallels to chase after. 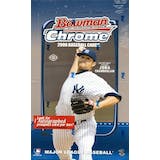 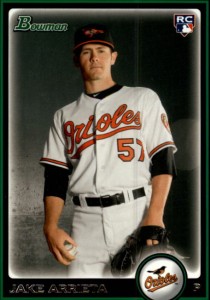 We got a glimpse of Arrieta in a major league uniform for the first time in 2010 baseball products. His rookie cards appeared in Bowman and Topps sets that year. 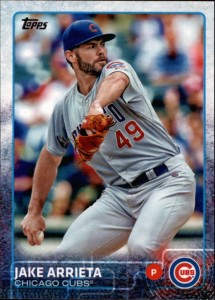 Arrieta has spent the last two seasons with the Cubs, and has been featured on cards sporting the blue and gray for the past two years.

Dave and Adam's is one of the largest sellers of trading cards and collectibles in the world. Located just outside of Buffalo NY, the company operates two retail stores as well as the e-commerce website www.dacardworld.com
View all posts by Dave and Adam's Card World →
2015-16 Panini Totally Certified Basketball preview
2015-16 Upper Deck SP Game Used Hockey preview