Yasiel Puig Cards are on Fire, and He’s Been Added to Upcoming Topps and Panini Products

By Dave and Adam's Card World on June 6, 2013 in Sports Card News and New Products

Yasiel Puig has only played three Major League Baseball games so far, but he’s made quite an impact on the baseball card market already. The Los Angeles Dodgers Outfielder has been high on the radar since he signed a 42 million dollar contract with the Dodgers in 2012, but now that he’s up in the bigs and playing well he is quickly becoming the hottest thing in baseball cards. Collectors and speculators are driving up prices for his existing cards, and anxiously awaiting more. 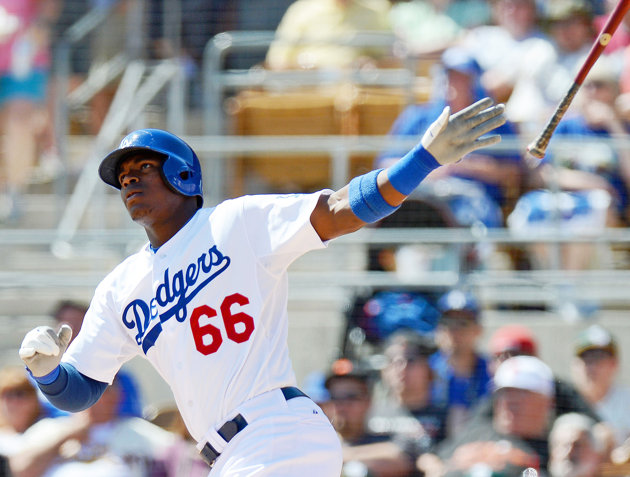 Puig cards are currently found in 2013 Bowman Baseball and various Leaf Baseball Products, and now he’s going to be in a whole lot more upcoming products. Topps just announced that Puig will be added to the following upcoming releases:

Topps also announced that starting with Bowman Inception Puig will be signing autographs and will appear on base cards and inserts for all upcoming 2013 Topps Baseball Releases!

Panini has also added Yasiel Puig to the following upcoming releases, and has mentioned to look for his cards throughout the remainder of the season.

Whenever a young star comes up and makes an impact collectors take notice. It will be fun to see how Puig performs for the Dodgers throughout the season and his career. If he keeps playing well, look for PuigMania to get even crazier.

To check out all of the upcoming releases for baseball cards, check out our baseball box and case pre-order page.

The DACW Buying Team is Heading to Charlotte, NC
Dave and Adam’s Selected as an Authorized Online Retailer for Cryptozoic Entertainment